TV Guide ads for "The Wrath of Khan"

Nice artwork of the principal characters from TWOK in this ad which spanned the bottom half of two pages, clipped from the TV Guide the week of the first network showing of "The Wrath Of Khan." There is no clue on the clippings to show when this was, although I know it was the mid-80's. If you know the date and year, share it in the comments with us and I'll update the entry. Below, the Close-Up entry for the movie.
Update: Thanks to reader Comboman who commented below, the year has been identified as 1985. That's about as mid-80's as you can get!
Final update: Commenter Rob has identified the exact date for us: Sunday, February 24, 1985. Thanks, Rob! 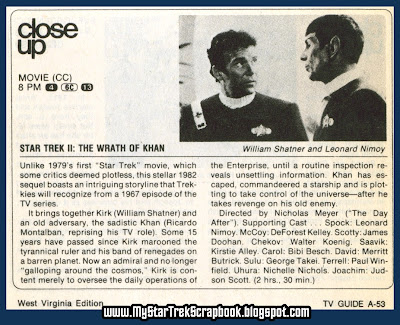 Below, a single newspaper publicity still made of up four images. 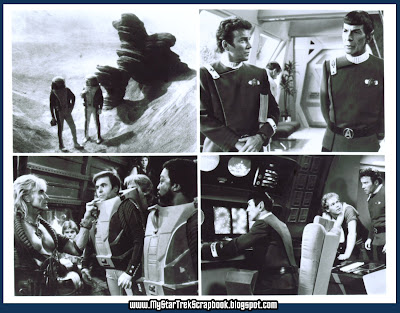 And two more of the postcards that came out commemorating the movie. Nichelle, lovely as always... 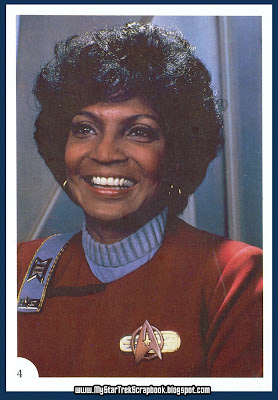 And Kirstie Alley, well before stardom and weight gain difficulties. 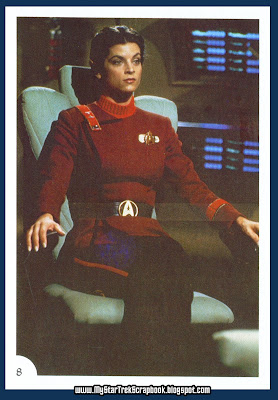 "I wonder if there's any of that banana cheesecake left."
Posted by Frederick

Wrath of Khan made it's TV premiere on ABC in 1985. It notably had extra scenes not shown in the theatrical version (though they are now included on the DVD version).

I remember seeing those during that broadcast for the first time... Scotty's nephew Peter, etc... I just couldn't remember what year. Thanks!

frederick, thanks for the great blog, your efforts are much appreciated!

Thanks for pinning it down for us! I am updating the post to reflect that. Thanks for the comment, too!