Happy 82nd birthday to Leonard Nimoy, who was the person that brought to life one of science fiction's most interesting characters, not only television's. He made being very intelligent look cool, portraying a man who could outthink you as well as put you down with a simple touch. As Issac Asimov wrote in his TV Guide review, smarts were suddenly sexy, and thanks to Spock, many were discovering they had a sapiosexual side. Thanks, Leonard, for many years of living in the shadow of Spock to bring a little more happiness into our lives. 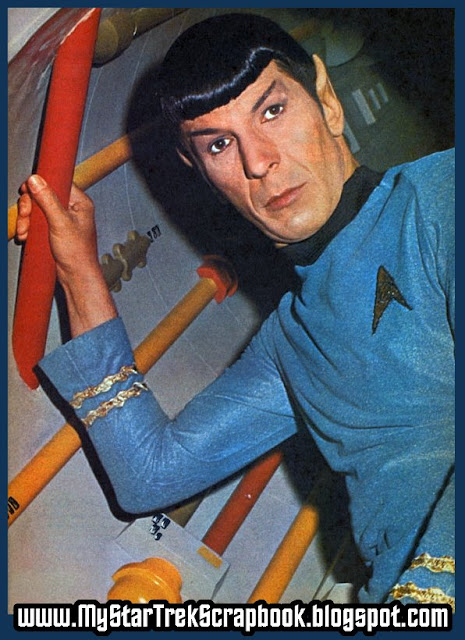 ﻿
Here is a link to view all of the Nimoy-centric posts on this blog; it would be a logical thing to review all of them on his birthday. Failure to do so may result in the Vulcan Death Grip, or as it is known on Vulcan, the Tal-shaya.
Posted by Frederick

Always great to be able to wish a Happy Birthday to one of our Star Trek heroes!!

Hey Fred, that's not a pipe. It's a red handle bar for climbing into the Jeffries tube. And it is most logical! --JohnG7

John,
I wondered about that, it may be that you are right. it would be a strange place for a protruding pipe. Let's just say that it is a handle, then.

Regarding the red handle bars, you can see them both (R & L) in Nichelle's EBONY cover photo, which is looking at them from the other direction (from inside the Jeffries tube). --JohnG7

John, thanks for the info! I have removed the incorrect caption. And for years I thought those were just pipes intersecting the tube at odd angles! Ya larn sumthhn new ever day.