The British publication TV Sci-Fi Monthly, published in the mid-70's, was a rare item to find, and a great one. Here is an image and blueprint of the shuttlecraft from the inside cover of issue #3, which came out in 1976.﻿ The cover for this issue has already been posted, you may view it here, as well as more material from the same issue.  Since this is such a short entry, I have added some extra bonus items below it. 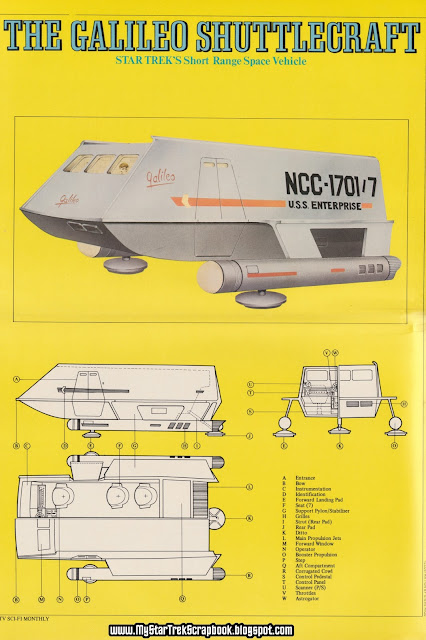 Bonus: publicity photo of Celia Lovsky as T'Pau and Shatner from "Amok Time." Notice her hand on his shoulder! 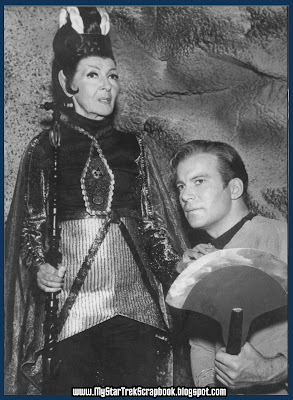 Bonus #2: Covers from the first of the adaptations of the animated series scripts by Alan Dean Foster, which to me were awesome, having the scripts actually expanded upon (unlike the truncated versions by Blish), with only THREE half-hour episodes per book! I bought this one at the Chi-Chester's Drug Store on Vineville Ave in Macon, GA one Saturday in 1974 when I was staying with my grandmother, and read it the same day. Good times! The store is still there, by the way. 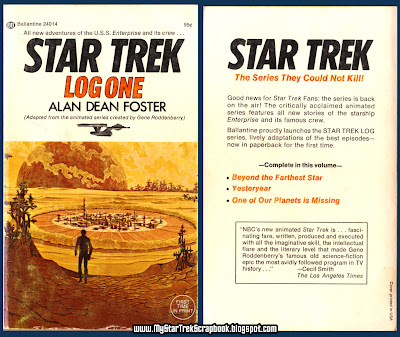 Extra special bonus! Below, we see some very revealing images of Uhura's panties during a scene from "Balance Of Terror." The flap on the back of the dress has come open, and she is showing more cheek than usual, even for her! What was Kirk saying, now? Who cares? 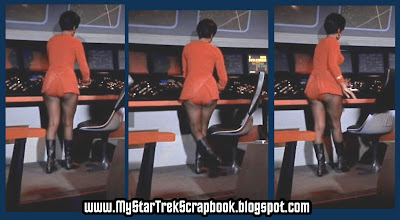 oh man...now that was when Uhura was Uhura! not Beyonce in need of a few cheeseburgers :)

On the Sci-Fi magazine, did they steal those diagrams from the the "Starfleet Technical Manual"? Or maybe it was from the model kit box?

Rob, I thought they were from the Tech Manual at first, but when I compared them I saw they were not. I haven't figured out where they were from yet, but it is likely they were from some other source. If I figure it out I will post it; if you do, or someone else does, comment and share!

Boy, look at Celia. Nobody can resist the magnetism of The Shat!

Uhura was so cute then.

FUNNY! Actually, I would watch that with interest myself, as that is one of my favorite music videos. Although I do prefer Nichelle in the part, and seeing her do that back in her prime would have been incredible.

Something of interest.
I wonder what it sold for.
http://www.kikoauctions.com/?nav=auctions&details=2030

as thats who original trek was all about wasnt it - the big 3 - Kirk, Spock, and Uhuru (j/k)

btw Frederick do you collect stuff to do with the new films? the IDW comics etc (im guessing you do if you're anything like me). would you do doing a nuTrek Scrapbook? (although there probably isnt enough stuff for that yet). plus do you consider JJ nuTrek to really be 'Trek' or just a mainstream Michael Bay style action franchise with the words 'star trek' slapped on - Star Trek In Name Only (STINO)

Anon,
I noticed that Uhura is now one of the main characters on the posters and in the film. I don't mind it, I just wish that the original Uhura had gotten the same attention! At least I feel she paved the way for the new one. I do consider the new Trek to be real Trek, a big film has to be mainstream with action, whereas a TV show can afford to slow down and do thoughtful stuff. I just don't have time to devote to it, it would take away from my TOS posting.