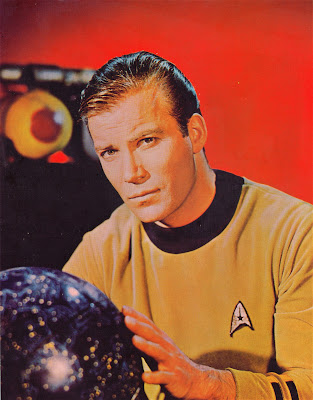 Even Captain Kirk's bowling balls are bigger. But, what was up with the eyeball?

Back in the mid 70's, the Lincoln Enterprises newspaper-format catalogs inspired dreams in my teen-age brain of the things I could get from it. The wonders it offered! I ordered a number of things from it, and had them mailed to my Grandma's house, where I would claim them when I went to visit on the weekends. She was my accomplice in "crime," the felony being that of aiding and abetting me in acquiring the unlawful Star Trek items that my stepdad forbade. 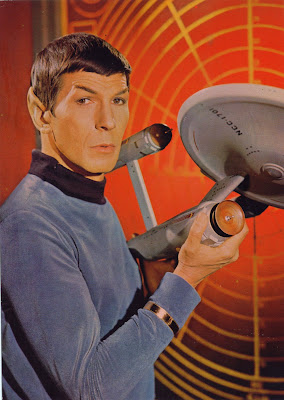 These photo postcards were beautifully reproduced on glossy card stock, and were the pride of my scrapbook. The promotional photos of Kirk and Spock, taken before the second pilot was filmed, were glorious to behold. 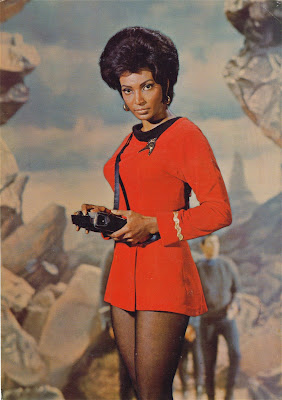 Red is such a lovely color, isn't it?

But the photo of Uhura above was my absolute favorite, and the best -posed picture of her I've ever seen, and I've seen plenty, believe me. Be still, my beating heart! 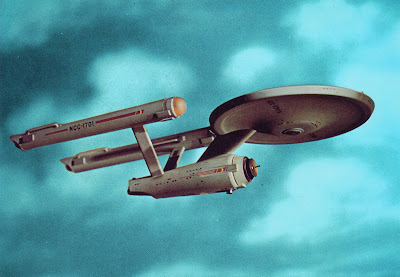 Pay no attention to those barely visible wires!

This was the only color version of this picture I ever saw. It was always printed in black and white in the magazines I had seen it in. When I opened up my package and viewed this, my mind almost ruptured. Remember, at this time I hadn't even seen that many episodes in color yet.

I ordered some other items from Roddenberry's company later, which I'll share with you in future posts!

Flash! I've just discovered that you can still get the full set of these from the Roddenberry site!

Your blog is AWESOME! Thank you thank you for the eye candy!

Thanks for the comment! Hope you enjoy ot for a long time to come.

I have always loved those early post-pilot-pre-series publicity shots of Shatner and Nimoy, probably because they were used so much in merchandising back in the day, on Gold Key covers and Bantam novels. I would to have a book full of all the original series publicity photos.
And how great is it that you can still buy some of that old Lincoln Enterprises stock from Roddenberry.com?

What I'd really love to find from good old Lincoln Enterprises is Gene Roddenberry's 1950s sci-fi script, THE SECRET DEFENSE OF 117 aka THE SECRET WEAPON OF 117. It was available from Lincoln back in the 70s, but is impossible to find now. Roddenberry.com doesn't have it, and I've never seen it turn up on eBay either.

I don't have that, but I'll keep my eyes peeled!

Thanks for the heads-up! I have posted a link to the group on a new entry to invite others to view and maybe they will join too.

A classic Star Trek fan AND an "A Christmas Carol" reference (and a fairly obscure one at that)! NICE!

Unknown,
Thanks for the comment, and you are the first one to say anything about that reference, which makes you ultra cool to me for recognizing it! ACC is one of my favorite books. Here is a site I do that is devoted to it: www.SheepLaughs.com/scrooge
Enjoy!