From issue #19 of Starlog magazine, published February of 1979, comes this edition of "Star Trek Report" by Susan Sackett. These monthly reports from Gene's secretary were a reliable and anticipated look at the progress of the movie.
(Click on images to enlarge.) 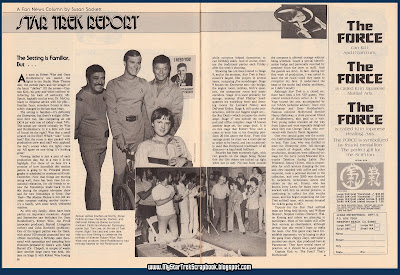 Update: Susan Sackett herself, who is a friend on my Facebook fan page, left these comments on the post over there: "Thanks for bringing back memories. Hard to believe they actually paid me to write this stuff! I think it was $300 per column, but I really don't remember, just that it wasn't a lot! Truth be told, it was really like trying to balance a ball on my nose for FOUR YEARS without dropping it! Finding things to write about and cheerlead for the "upcoming movie/TV series/whatever" month after month was a real challenge. Glad you enjoyed my little contribution!" Yes, we did, Susan. Thanks for the insight!

Bonus: below, from the same issue, a short news bit about the Yellowstone location shooting for the movie. 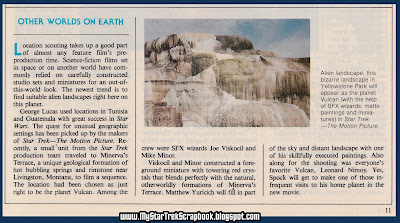 Also gleaned from the same issue comes this writeup on a Trek spoof by an Australian TV show. Although I never saw it, (with apologies to Mr. Hogan) it sounds about as dumb as a lot of the others done since then, a tradition that continues to this day... and they haven't improved much. 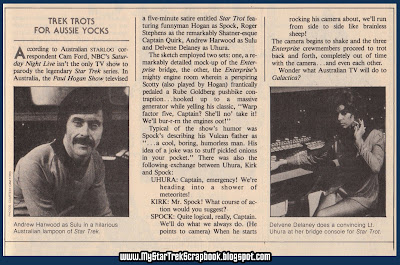 And below, finally, is a sad reminder of the time when I heard the news that talented Trek fan Mike McMaster had passed away. 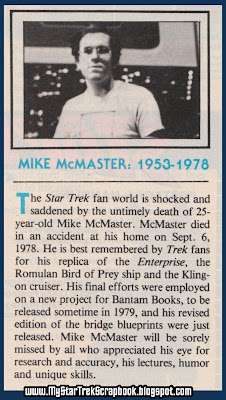 For more material from this issue, go to my other blog "Fantastic Flashbacks" for a look at the painful collective memory known as "The Star Wars Holiday Special." Yes, Virginia, it does exist!

I'm sure you're pleased that the complete soundtrack to Star Trek III was announced yesterday!

SW Holiday Special is a happy memory for me! What would be painful would be to watch it now ha ha. But it seemed awesome when I was 6 years old!

C.K.,
Yes, I was happy to read about it this moring over at Trekmovie.com! My record is about worn out.