From the August, 1984 edition of "Twilight Zone" magazine, comes this article on "The Search For Spock." The main article is an interview with Leonard Nimoy on directing the movie, and there is an inset writeup on Cathie Shirriff, who plays Valkris. She was first Klingon female we had seen in the movie series, beginning the welcome tradition of Klingon Kleavage.
(Click on images to enlarge.) 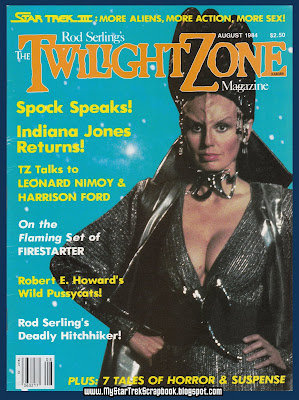 "I challenge you to a battle of the Bh'Rhests." 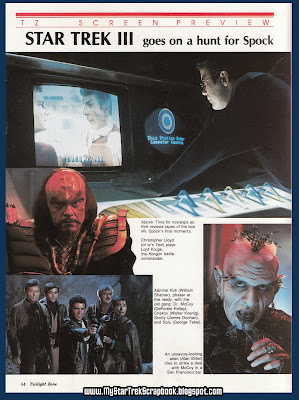 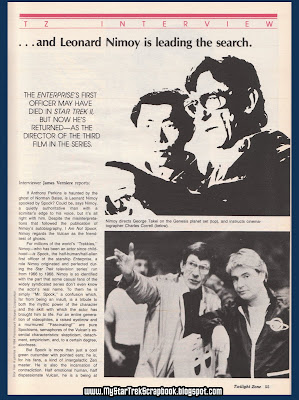 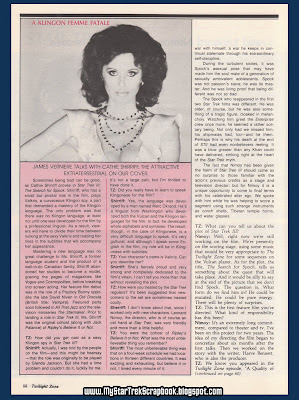 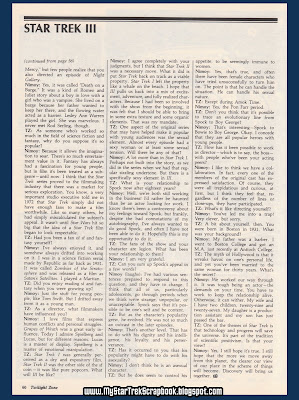 Bonus: Below, another of the 1967 Leaf bubblegum cards, this time sporting a caption that actually makes sense. If it had continued the trend the other cards followed, it would have sported something like ""What's on the menu?" or "Opening the mail." 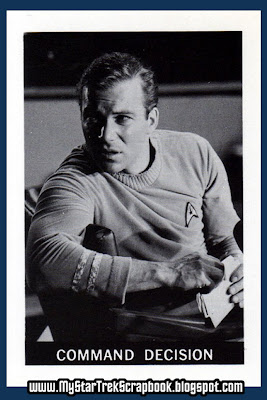 And one last bonus image, a nice publicity shot of Kirk and Bones on the bridge, in a slightly different pose than the others taken at the same session. Kirk looks a little uptight over something in this one. 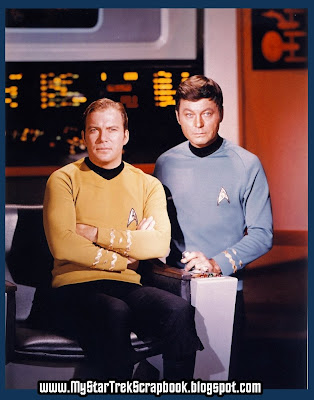 "Forget it, Bones! I'm not going on another diet."

Really liked the article on ST:SFS. I can't help feeling though, with the writer's insistence that Spock is "asexual" that he's kind of missed the point. By a few thousand miles!

I thought the same thing! Also, what kind of question was "can you trace the evolution from Spock to Boy George?" Nonsensicle stuff.

Those Leaf cards are a riot! Is there a place to download scans of the fronts and backs of the whole series? Purchasing a vintage set is not in the cards for me...

It´s always great to be here. Thanks for your site. Would you like to visit mine?
Greets, Kolja

I have just been pointed to a page on TrekCore.com where the entire set of the reprint edition has been posted:

Thanks Frederick; keep up the great work on the blog!