Via a trip through the Guardian of Forever, from out of the dim past of the year 1969 (near the end of the show's first run) comes this article from issue #14 of the terrific magazine "Castle of Frankenstein." (Read an earlier post of the CoF #11 Star Trek article here.) 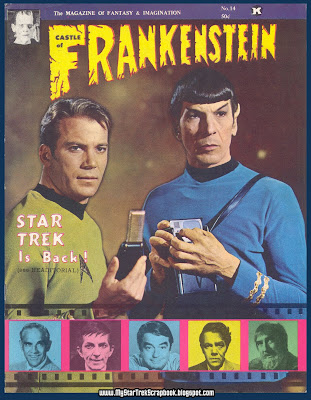 "Castle of Frankenstein" was a monster/genre mag written on a more mature level than any of the other such publications of the time, and the graphic layout was bold and exciting. Covering science fiction as well as horror, and TV as well as film, the magazine was a real treat. 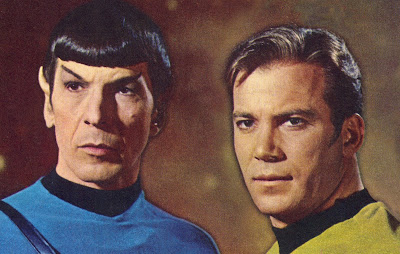 Above is a detail of the cover photo, corrected for the picture's reversed state.

Now, before you dig into the article, expecting to read details not seen since 1969, a word of caution; it's not a pro-Trek article. In fact, it's a printing of a letter sent to the editors by someone with not just a bone to pick with the show, but a whole skeleton. Reading the diatribe, one truly wonders if they are talking about the same show we know and love. But hey, the pictures printed with it are good! 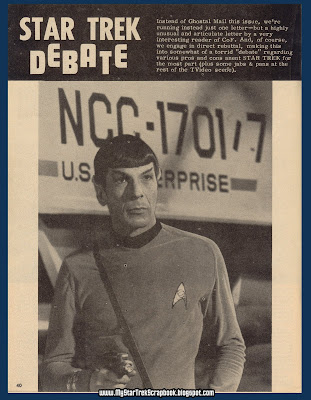 I think you'll be amazed as you read the things they write about some of the episodes, several of which are now regarded as among the best. His insults of the various facets of the show, calling DeForest Kelley 'a hack," for example, and the makeup artists efforts "abominable," are laughable to me. His example of the "failure" by the makeup artists by "having to bring in John Chambers" to get Mr. Spock's ears right is wrong as far as I can determine; Fred Philips saved the day from another makeup artist's poor efforts by working many late hours making the ears as we saw them in "the Cage." Although John Chamber's contribution of the ears is a popular bit of trivia, neither the "Making of Star Trek" nor Nimoy's books "I Am Not Spock" and "I Am Spock" mention him as being involved in the difficult process. (This is backed up here.) The book "Inside Star Trek" does mention that Fred Phillips designed them and had them made in John Chamber's makeup lab; but the results that came back were still too crude, and Phillips had them sent to someone else at MGM to do them. Be that as it may, right or wrong, it has little impact on the sweeping charges brought by the irate writer that "the makeup is beyond belief, it is so bad." 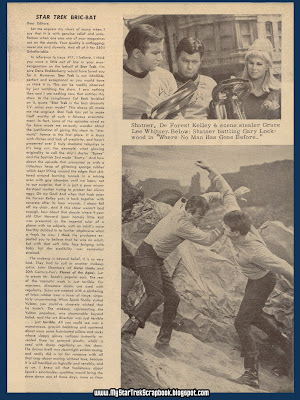 Calling the ground-breaking exterior design of the Enterprise "lacking in grace and sleek beauty," (whu-u-u-u-t?) and the interiors "disgustingly bad," on the level of the old "Flash Gordon" serials, he compares the art design unfavorably to three of Irwin Allens' shows. That particular statement boggles the mind, because most of Allen's sets consisted of blinking lights and reel-to-reel computers against a black background. His criticism of the show's legendary, memorable musical scores is the final straw. I think it must have been Irwin Allen himself writing under an assumed name. 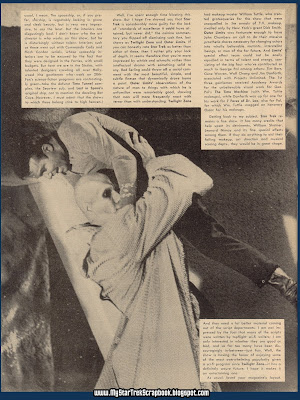 The photo above represents the writer's attack on the show. 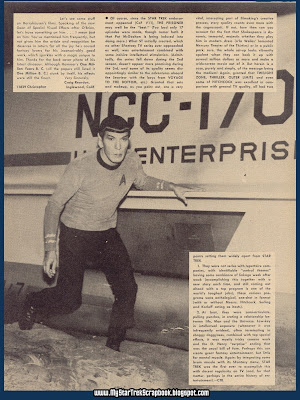 Mr. Spock prepares to launch a counter-attack against the illogical critic and open up a can of well-deserved Tal-shaya.

Well, it was interesting to learn in historical hindsight that some saw this outstanding effort at bringing believable science fiction to the tube as greatly lacking; but as Captain Kirk said, "there's no accounting for taste." The editor's weak "rebuttal" at the end did nothing to argue against some of the more ridiculous statements, but the show itself is the strongest argument. It has stood the test of time and then some! If I had been the editor I would have filed this letter under "crank" and wrote something worthy of the magazine.


Update: The name of the writer is Craig Reardon, and I wonder if he is the same Craig Reardon that became a movie makeup artist? If so (and it seems likely since they are both from Inglewood, CA), this might explain his extreme criticism of that facet of the show's production (which was way off-base in my opinion, in any event). It would be ironic if this were the case, since he went on to do the makeup on one of the Star Trek spinoffs, Deep Space Nine! He would have been close to 16 at the time of the letter... so it's possible. I wonder if he still feels the same way about the original series now? It would be interesting to find out.

Below is a small writeup about the looming cancellation of the show from the same issue, which makes for fascinating reading. Too bad some other network didn't pick it up, give it a bigger budget and restore Roddenberry to producer status. 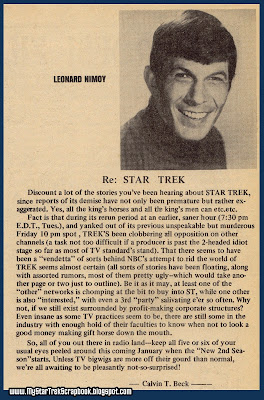 Bonus: below, the next in the series of four TOS coasters referenced in the last post. I never used these four to hold my drinks; I reserved that for the four Voyager ones. 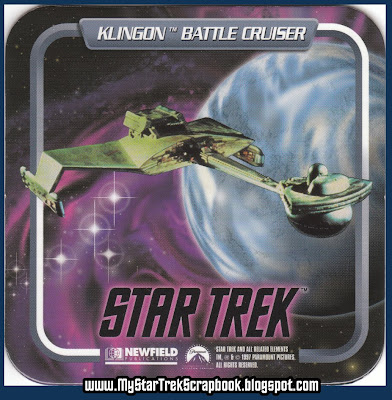 Bonus: Lastly, another of the Random House Star Trek greeting cards from 1976. The inside text says "Let's keep in touch!" 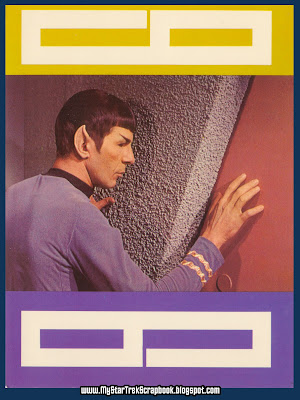 "Oh, man... dude, it's like, it's like, I can totally feel the color of this paint! Seriously, you gotta come feel it! And bring the Fritos."
Consider that card's sentiment of "let's stay in touch" to be an invitation to comment about this post! I truly do enjoy hearing from my readers.
Posted by Frederick

HI FREDERICK!
I AM ASHAMED TO ADMIT THAT I HAVE ONLY BECOME A FAN OF STAR TREK TOS ABOUT 18 MONTHS AGO...THE ONE THING THE SHOW AND I HAVE IN COMMON IS THAT WE WERE BORN THE SAME YEAR!SINCE THE FALL OF 2008, I HAVE BEEN SOAKING UP WHATEVER I CAN GET ON TOS,AND THERE IS NO LACKING MATERIAL THERE, BUT YOUR SITE ENABLES ME TO CATCH UP ON IT AT WARP SPEED! TRUTHFULLY, IT IS A PLEASURE VISITING HERE AND THANK YOU FOR ALL OF YOUR HARD WORK! PATRICIA

Thanks for the comment, glad you have discoved "the joy of Trek!" One of the fun things in being a new fan is the excitement of discovering new things about the show, I remember that feeling well. Hope your time spent here continues to be a lot of fun as well as informative, Comment often when you feel like it!

Just wanted to say thanks again for this and your other fun blogs, my friend. The web is so full of crap, it's nice to know that your blogs exist when I need a little shot of good times, happy vibes, and friendly nostalgia. :)

Thanks for the compliment! The attributes you mention are exactly what I was hoping it would project; a relaxed and fun atmosphere that approximates online the experience of old Trek pals getting together to go through old collection items, and reminiscing about the memories they bring up.