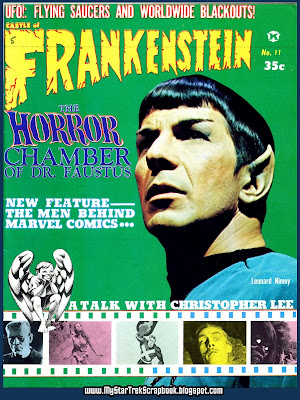 I know, I've been posting material about the production of the first Star Trek movie for awhile, but that doesn't mean I've abandoned the original series material, no sir. I'll keep posting it as long as I have something to post in that area, and add in the movie stuff also.

"Castle of Frankenstein" was a monster magazine that respected it's readers and didn't talk down to them, or load every single article with horrible puns and one-sentence paragraphs like Famous Monsters. The writeups were intelligent, and the magazine dense with material that made reading it like mining a vein of horror gold. (I also dug out a nugget to feature over on my movie ad blog "Held Over!") It was monsters for more mature fans that even showed the occasional bit of partial nudity that might be in a movie. Of course, the kids like me ate that up too.

So this issue from 1967 that covered both my love for monsters and Star Trek was a double-whammy that knocked me for a loop! I was late coming to the show, and found this in a second-hand bookstore in the early 70's, but it was new to me and exciting as all get out. Enjoy this scan of my issue, and try to imagine, if you can, what it was like to read an article about the show when it was still in production. The excitement I felt at seeing anything related to the show back then was unmatched by anything else in my life at the time. It was truly special, and hard to explain to someone that has never felt it.

Since the mag is about monsters, the photos pretty much focus on that aspect of the show. But the article revealed at lot about the show that I didn't know at the time, and I eagerly devoured it! 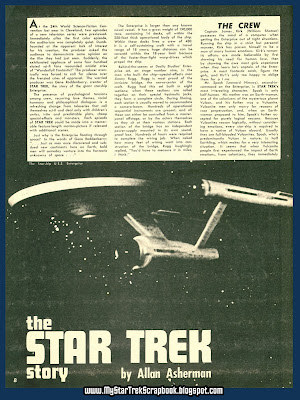 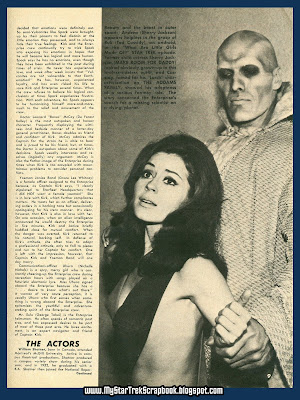 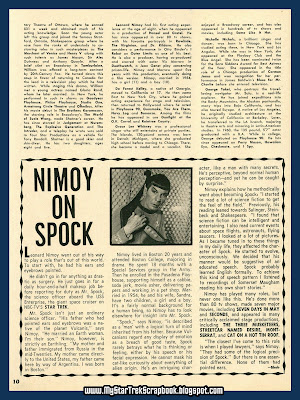 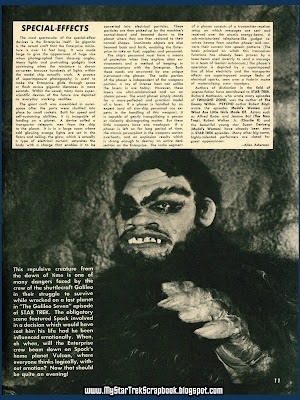 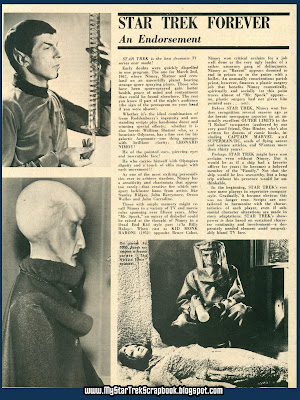 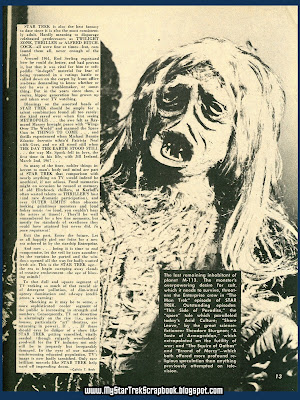 I love the picture of the actress from "What Are Little Girls Made Of?" She really fueled some adolescent fantasies of mine!

Fun blog! I love all the stuff from ST:TMP, which I have very fond memories of.

Yeah, Sherry Jackson in that sideless outfit added a lot of fuel to those teen and pre-teen fires!

She made a hit at the convention where Gene showed the first Star Trek episode to the crowds as well. She went with him in full costume.

This is the first big article I remember! I still have the pages tucked away. It's Asherman's classic Trek article!

Thanks for commenting, it's always a treat to read your input!

It must have been great to find this at the actual time of publication, while the show was still on the air in first run. I loved that photo on your blog of you in your room with all the Trek stuff on the walls! Thanks to my oppressive step-dad I had to hid all mine when I discovered the show as an young teen in the early 70's. Sounds like you had a great time as a kid and teen!

The writer of Star Trek Bric-Bat praises the creatures on Outer Limits, but bashes Trek's Horta. But the Horta was apparently a reuse of a costume used on the Outer Limits. Guess it looked worse in color?