We've recently been looking in detail at the individual paintings that Kelly Freas did in 1976 as part of a set called "Officers of The Bridge." (You can see all the posts, once they are done, by using the "Kelly Freas Art" tag on the right side of the page.) They were originally created for the program booklet (pictured below) for the New York Star Trek convention at the New York Hilton, held Jan 23-25 in 1976, which, besides the portraits, contained cast and crew bios by Ralph and Valerie Carnes.
(Click on images to enlarge.) 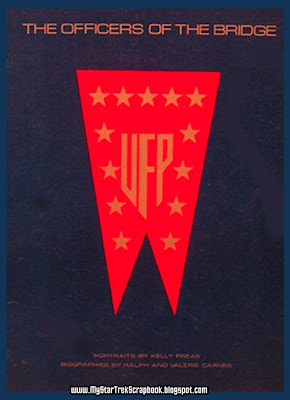 This time we are looking at Mr. Scott's portrait, which is one of the most interesting paintings in the set, in that Scotty is decked out in his dress uniform and traditional kilt. He's holding (what is probably) a basket-hilted Claymore, and the face appears to be based on a picture of James Doohan as he appeared at the time, beard and all. The background depicts Montgomery Scott's Scottish heritage, ranging from the ancient Celtic castle to an early pulp sci-fi-style rocket.

There Can Be Only One. 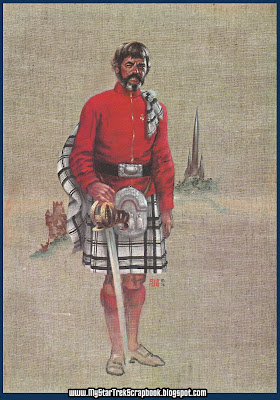 "Fool me once, shame on you. Fool me twice, and I'll run ye through."
And below we take a closer look at the chiseled visage of our Scotch-loving Scottish engineer, who looks as if a Klingon just insulted his beloved ship. Seriously, you do not want to mess with a man who is holding a sword and has an expression like that. A great piece of artwork, and one of my favorites in the set. I'm betting that this hangs somewhere in the Doohan household. 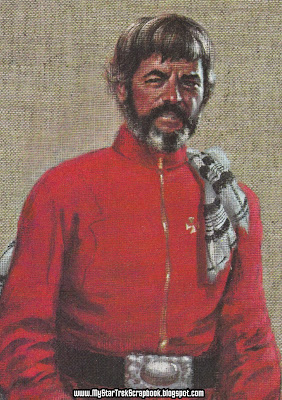 Update: Reader Rob Bignell submitted a comment with a link to this photo he found online, of Doohan at a convention in 1975. This confirms that the portrait was based on photos of Jimmy at the time, and it's very accurate! Thanks, Rob! 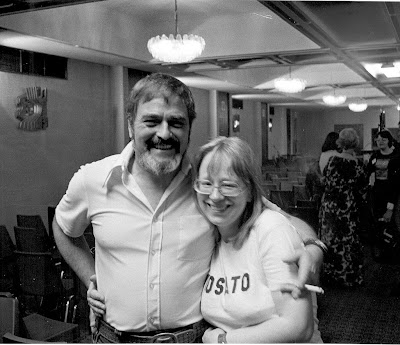 The fan in the photo still has scars from cigarette ash burns on her arm, which she treasures to this day and proudly shows her grandkids.

Below, a scan of a photo from one of my scrapbooks showing the wearin' o' th' kilt, which gives new meaning to the term "dress uniform." 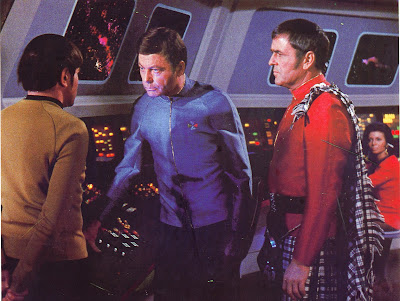 "Mr. Chekov, if you keep insisting that the kilt was "inwented in Russia," Mr. Scott here is most certainly going to deck you."
Bonus: (Updated on 1-13-10) Here is the salute to Doohan from Starlog issue #112, which celebrated Trek's 20th anniversary in October of 1986. 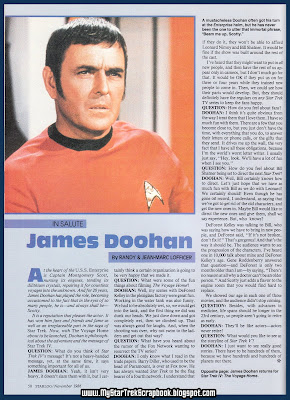 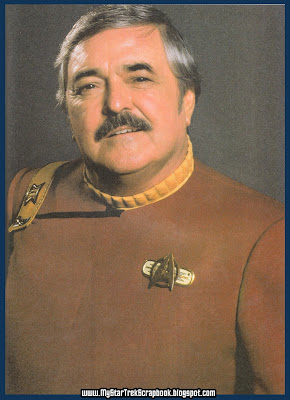 Bonus #2: Below, a writeup from the same issue of Starlog on the location filming of "Star Trek IV: The Voyage Home," which shows Jimmy turning on the legendary charm for a bonnie lass visiting the set. 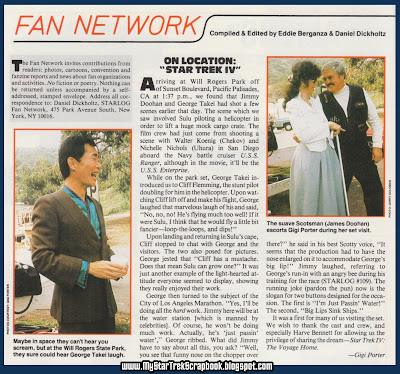 Update: here's a link to a video found online where James Doohan talks about his encounter with a suicidal fan. Quite touching!

Next: the best legs in Starfleet! You know who I'm talking about.

This piece is my favorite in the Freas collection - it's distinctive, and I love the retro pulp rocket in the background ("I've never seen anything like it - and ion propulsion at that!").

Rob,
Great find, thanks for posting it! It does prove that the portraits were based on then-current cast photos.
I remember seeing the recent cast photos in the book "The World of Star Trek" as they looked just a few years after the series, and wondering how they would ever look like their characters again if (and when) Trek was made again. But with the wonders of makeup and lighting, (although older) they did!

Hi Fred!
Love your blog, best Trek blog I've seen.
Kelly Freas was a Master, the Dean of Sci Fi, but I agree with you the Spock and Kirk likenesses are a bit off.Shatner has one of the most difficult likeness to capture in my opinion,my favorite Shatner portraits are the ones by Drew Struzan, Bob Peak and Mort Drucker.
McCoy and Uhura are the best of the Freas series

These paintings are absolutely beautiful.

Also, I love it when you do articles on Doohan. I noticed Jimmy never got as much attention as he should have.