The article on the right I clipped from the National Enquirer circa 1975. This was the first of many articles over the years that talked about the tech in Trek working it's way into the real world, often by inspiring young technology developers.

Shatner has even done a book and a TV special about the topic, as have other writers. I many ways what we have has surpassed the filmed Treknology of the 60s', which predicted a lot quite well. The big ones, like warp drive and transporters, we are still a long way off from having, if ever.

Next is a short bit about Shatner clipped from a movie/tv fan magazine, which went into the trash as soon as the article was cut out by me. Who cared about all the other things in it? I was on a hunt for Trek stuff only. Note that the Shat's propensity for shirt removal was not limited to the show only. If only there had been more equality for the women on the show in that regard. 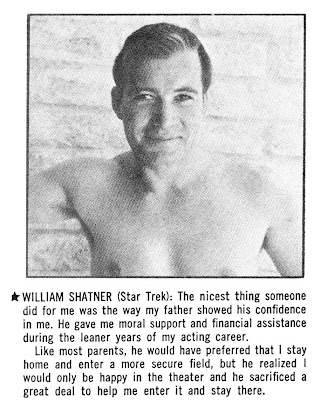 And as an extra bonus, below is the cover of a magazine from May 1977. During it's short run it did a lot of Trek related items. 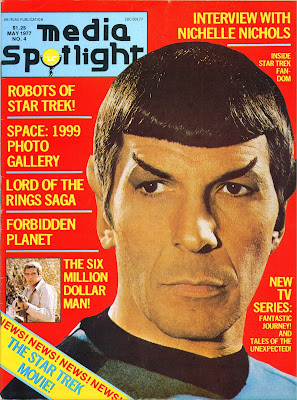