The Skybox Masterpiece Series: Star Trek edition is a collection of cards with painted artwork depicting scenes from all of the incarnations of Star Trek up to that point, and much of the art was amazing. I have most of the cards, I only wish someone would release a book of the paintings in larger format, like the Star Trek "Ships of the Line" books did the calendar art. I also wouldn't mind owning a print or two from the series to frame! Today's post is from the Non-Sport Update cards magazine, published in the summer of 1993. I will be scanning and posting more of the cards in the near future.

First, the cover, a reproduction of one of the Wrath of Khan paintings, and a fine one it is...


(Click on images to enlarge; once open, you may have to click it again to view full size.) 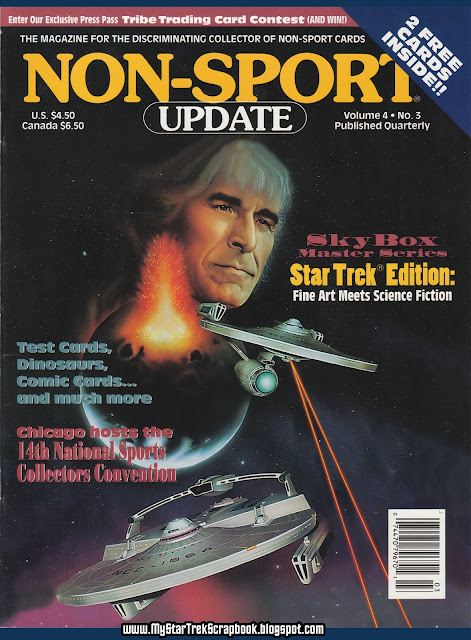 Below is the write-up about the cards, framed as a fictional encounter between the TOS crew and a rep of the Skybox company. Someone should have told the writer how to use stardates to indicate real-time dates. I figure that out in the early 70's when labeling my cassette tapes, as "Recorded Stardate 7405.15." 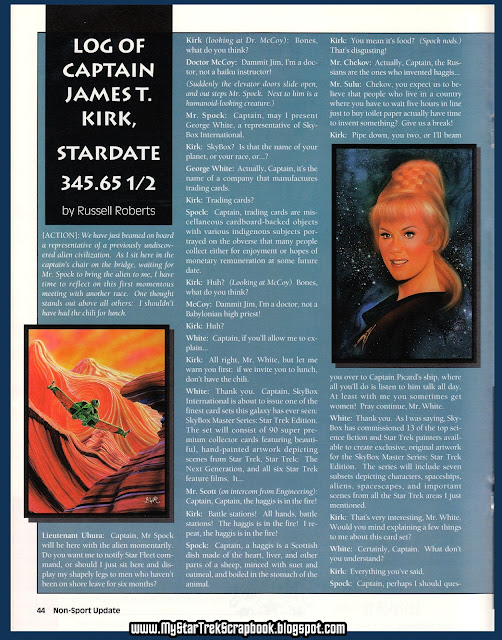 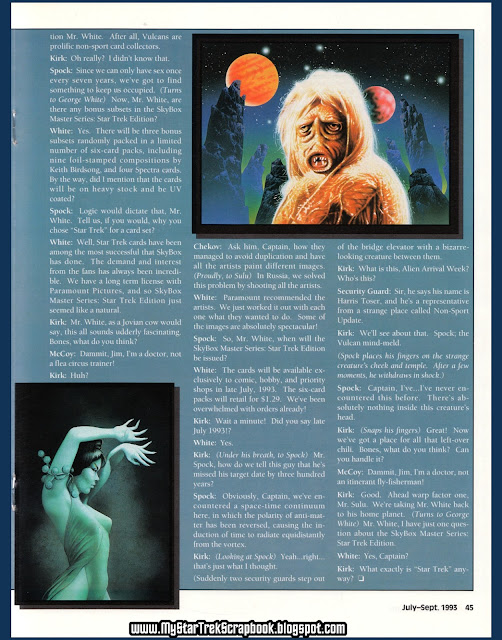 Bonus: Director Nick Meyer confers with Shatner on the set of "The Wrath of Khan," from the book "Charting the Undiscovered Country: The Making of Trek VI." 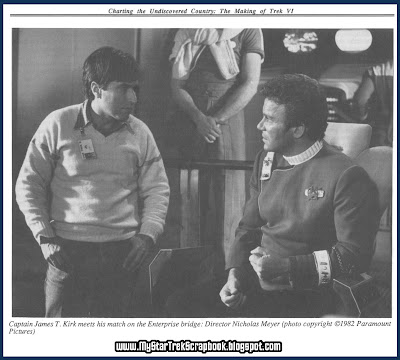 
Bonus: Shatner enjoys a clinch with shapely Sherry Jackson (who played the android Andrea) in a publicity still taken during the filming of "What Are Little Girls Made Of?" 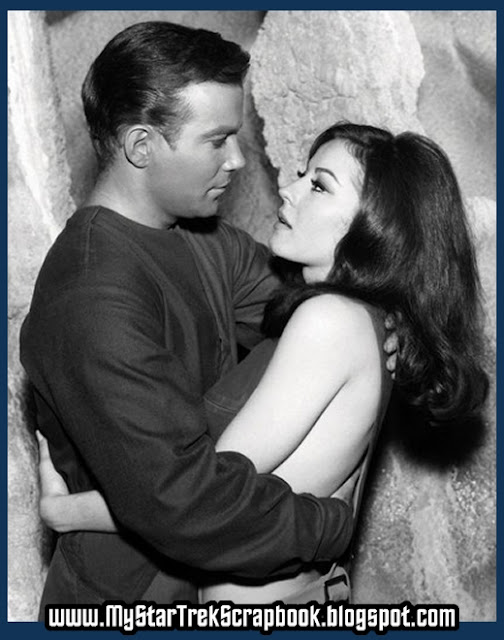 "Are you... fully functional?"
Posted by Frederick

i can remember being in a comic store deciding whether or not to buy the "Charting the Undiscovered Country: The Making of Trek VI" book back in 1992 as it was quite expensive (esp in the UK where they added extra on to the cost).

At the time there was a lot of those cheapy 'unofficial' Trek books around and this looked like just another one (esp the crudely painted cover), but upon closer inspection it looked to be something of a companion to Image Publishing’s 'The Making of The Trek Films' book by Ed Gross (the one where the cover was the movie Enterprise reflecting the original Ent in a space pond) which i had once seen a few years before around the time of Trek V but hadn’t bought as it was too expensive and had desperately been trying to track down since. (I asked the store but they couldn’t help and even remember getting the Image publishing address out of another book and writing to them about how I could buy it again in the uk!)

Anyway I must’ve seen The Making of Trek VI there on the shelf over a period of about a week before I finally decided to buy it despite the price. It took quite abit of info from the Trek VI Cinefantastique issue that was out around the same time, but went into a lot more detail and was packed with B&W photos id never seen before (like that Shatner/Meyer one). I remember being astounded at learning all the stuff I had no clue about before - the original gargoyle ending for Trek V, the animosity some of the cast had with shatner, the lost opening of VI where Kirk rounds up the crew, the whole lost Trek VI: Starfleet Academy movie, and speculation for Trek VII (would it be a TNG movie or another TOS movie) - each chapter was a wealth of information…which for someone who became a fan of Trek due to the movies was just what I wanted.

On the back of the book one of the reviews states ‘This may very well be the best book ever written about star trek’ and I totally agreed and I came to consider it as my favourite Trek book of all (and still do). i guess part of that is due to the time period - Trek VI, Unification on tv, the 25th anniversary - I wrote that long piece on the 25th annivesary era and buying all the stuff in the Spock Must Die thread so yeah i was loving that time in the early 90s for Trek - and the Making of Trek VI book was a significant part of that.

Btw shortly after purchasing the Trek VI book I went in the comic store one day and saw The Making of The Trek Films Revised Edition on the shelf waiting for me and I snapped it up immediately (It included only a few pages on VI unlike the previous I-V where it went into in depth detail - but it didn’t matter as I had the Trek VI book to go with it. But it was nice to have it complete I-VI unlike if id managed to track down a first edition copy it would’ve only gone up to V). I remember coming out the store feeling EPIC! (Patrick Stewart style)

Shatner was one lucky SOB getting to make out with Andrea. no wonder the other cast didnt like him LOL. she was one of the top (if not THE top) beautiful woman not just in the classic series but the entire history of trek.

remember reading a book (maybe Inside Trek by Bob Justman?) where he said she was stunningly beautiful and thought shed go on to be a major film star she was so striking looking...pity that didnt happen but then again so what, she was in classic trek and that will live on just as much or even more so than any films made in the 60s & 70s.

Anon #1,
Thanks for the comment, and sharing your memories of that book! I will be posting more from it in the future since I "rediscovered" it in one of my collection bookcases.
Anon #2, You are so right about Sherry, I remember a story about Gene taking her to a SF convention for their first exposure to Trek (she was in that costume) and Isaac Asimov was hitting on her!

Re: Making of Trek VI - that’s great! I look forward to your future posting on it :)

It wasn’t a conventional trek book by any means - the bizarre painted cover, the rectangular size, the publisher, the rare photos etc I think it made me like it even more - kind of an unofficial secret thing that was only available in specialist comic stores (esp in the UK), a book that not many people would know about that not many people would have. Unlike all the other Trek books and the official Making of books like the ones for Trek I, II, and V (which Shatners daughter wrote) - those books were probably everywhere ( I know Trek V was). Plus the way cast and crew candidly told stuff dishing the dirt on various aspects of Trek (Bennett trying to do SFA movie instead of a proper original cast VI, shatner hating etc)- unlike any official books of the time. (I don’t think any of that stuff went in the official books until Shatner started the Trek Biographies a few years late in the mid 90s - in fact I remember thinking his ‘Movie Memories’ was very much like The Making of the Trek Films)

The Making of Trek VI and The Making of the Trek Films are my most prized Trek books. Also I notice both fetch quite a price on amazon/eBay which is nice to see.

Wow it's really nice...Excellent work you did. I have you bookmarked to check out new stuff you post.Keep sharing more.
Scrapbook