Star Trek Day: A Flashback to 30 Years Ago!
(Click to read larger-sized.) 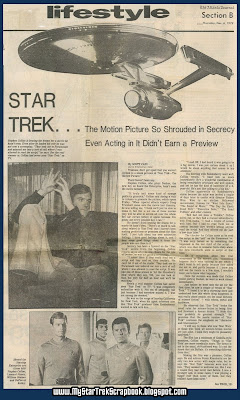 
It was the weekend of the big premiere of the long-awaited Star Trek: The Motion Picture! It was coming out the very next day, Dec. 7th, and the papers were full of items to save. Of course, it would be a full month later before I got to actually see the movie; my stepdad, you recall, was vehemenantly anti-Trek (because I loved it, not because he ever saw it) and he was watching like a hawk to make sure I didn't go see it. I finally went a month later after the heat was off and caught it at a discount theater, after saying I was going by the mall... which I did, I drove right by it on the way! 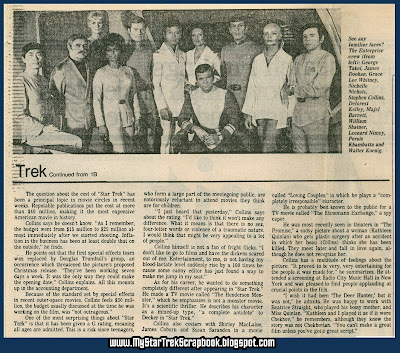 But not even that could blunt the joy and excitement I felt at the return of the show in movie form, and opportunities abounded for collecting items! Fortunately, I am no longer under such cruel restrictions, and am looking forward to going this Saturday to see the new Trek movie, which has had the kind of excitement not seen since the first movie all those years ago. And the reviews are being much kinder to this one, so we have no doubt that Trek will go on.

Below, since the interview this time was with Stephen Collins, here is a good promo shot of him as Captain Decker. (Since he's wearing that infamous one-piece jumpsuit, be thankful that the picture is only from the waist up.)

(Edited on 10-28-2014: Since the news broke a few weeks ago about the admission that was secretly taped and made public about Stephen's indiscretions toward minors, the comments made by visitors and myself in the comment area below about his "overall decency" now seem misplaced. There is an ongoing investigation, but no charges have been filed yet. This whole situation makes me sad.) 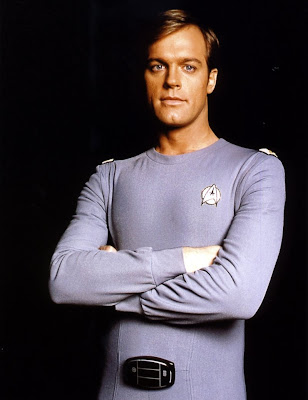 Bonus items: Below, a humorous "newspaper clipping" that was actually from a Mad magazine, from 1977.

Below, a page from a ST coloring book, that came out about 1976 or so. Copy it to your computer and do your own digital coloring, or print it out and let your kids have at it! The art and likenesses were actually pretty good in this series, so I bought them and hid them well, along with my flattened ST:TMP Happy Meal boxes. Most teens would have only had to be worried about hiding a Playboy, right? Not me! A coloring book of ST would have been fuel for a very tense few moments of yelling and berating me for the "childishness" of my hobby, indeed! I think finding a Playboy would have brought him a sigh of relief. 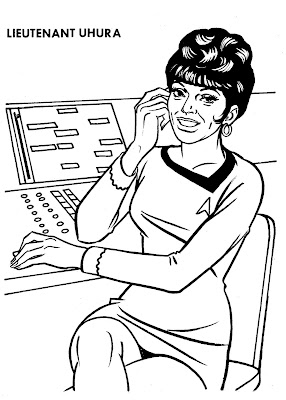 From the other end of the artwork spectrum: below, a lovely painting of Uhura, one of the best I've seen! Source: http://mshindoiart.com/coppermine/displayimage.php?album=2&pos=16 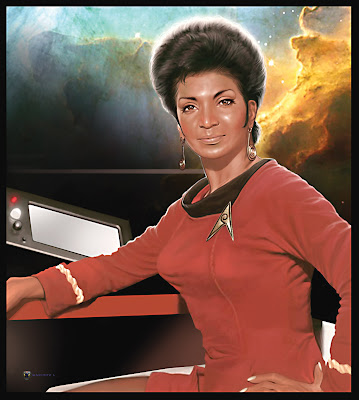 "Let's open hailing frequencies, shugah!"
Ah, Nichelle, your character may be recast, but you can never be replaced, and your beauty never eclipsed by another, nor that red miniskirt filled out better.
Posted by Frederick

Maybe its because he played a pastor on that WB show forever, but Stephen Collins always seemed like a nice guy, and he did a lot with what was pretty much a thankless role in the first Star Trek movie. I dunno how much work he got from playing Decker, but I have a soft spot for the short-lived Indiana Jones rip-off series he did for a season on ABC, "Tales of the Gold Monkey". Any show with Roddy McDowell sporting an outrageous French accent has my admiration.

I agree about Collins, I've never seen or heard anything about him to suggest anything otherwise that he is a decent sort. When I watch "7th Heaven" as my wife watches it, it feels a little like "old home day" with both he and fellow Trek guest star Hicks. I also like how the show portrayed a preacher's family as real, both human and fallible, but authentic in their belief and lives. So little of that on TV, in a time when people of faith are portrayed as hypocrites and charlatans.

But it was funny how he was trying to promote a film when all he had to go one was a feeling, and other's comments about it... which ultimately proved to be mostly inaccurate.

Regardless of how the film was received, I think his role really was a breakout one for him that resulted in more opportunities.

Jay,
thanks for the heads-up, I have deleted the little bugger!

I think Collins is superb in TMP, especially in scenes with Persis. I would have loved to see the two of them in the ST Phase II series Gene planned for in the mid-70s. Thanks for the nice words about preachers, BTW. ;)

Lt. Uhura is and was amazing as is Nichelle Nichols. Check out www.workshoptypes.com for full review

Check out the photo at the bottom of page one of the Stephen Collins interview. It's the same shot TV Guide used for their "Close-Up" for "TMP"'s ABC-TV premiere in the issue that covered February 20, 1983. Collins was cropped out of the photo TV Guide used.