A few posts back I started a little project to scan in the entire issue of "The Monster Times" #2, the first to be devoted entirely to Star Trek... the first of any magazine that I'm aware of (this might not seem like a very ambitious project, but it is time consuming, as each page must be scanned in two sections and then Photoshopped back together). You can read the first article posted here; but if you are coming in late, you can catch up by using the "The Monster Times" tag over on the right to access them all. Published in 1972, this issue was a goldmine of info and pics for the young Trek-hungry (and in many cases, Trek-starved) fans out there. Below is the index page of the magazine, which will serve as a guide to what I've posted and what is yet to come. 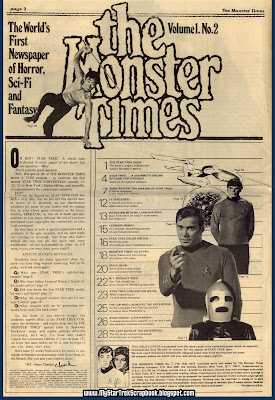 This time, we are looking at article #2, titled "Star Trek: A Gourmet's Dream of Food For Thought." More than your average kid-aimed sci-fi show, Trek was, for the most part, well-written and intelligent. Looking back and considering the other genre shows out around the same period, it's a true miracle it was done so well. 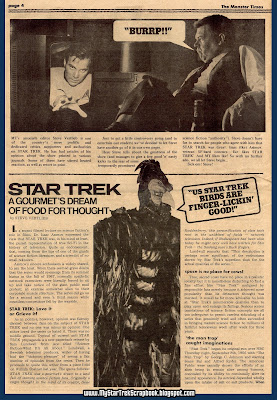 On these pages are some good examples of the graphic layout that made the publication so interesting: if you will notice, almost every picture is trimmed in such a way to make some element (heads, quite often) extend out from the background into the paper area. This extra effort, as opposed to just sticking pictures in, made the visual experience much more fun and engaging. 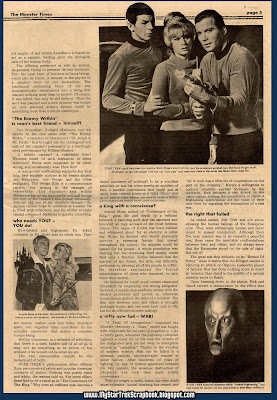 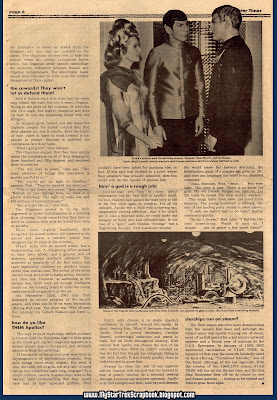 Bonus: Below, another installment of the regular feature "Trek Talk," from issue 35, published July 1974. 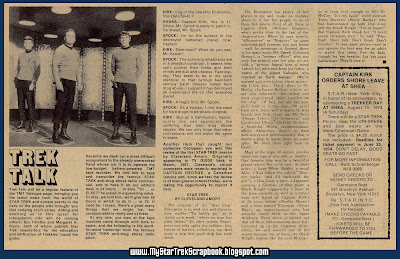 Bonus: Below is a neat publicity photo of everyone's favorite country doctor, Leonard McCoy, taken against a projected background image from "The Cage." The only other one I've seen like it is of Uhura. 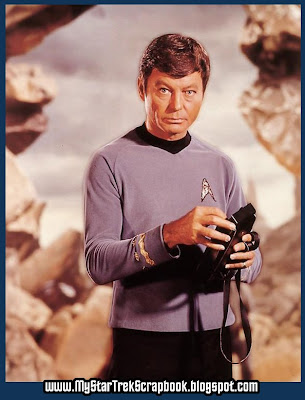 The Monster Times was one of the few sources for Trek related news in those pre Starlog days. I had all these issues. Great to see them again.

I have never before seen the Anton and Lenore Karidian publicity shot used in the article, or the shot of Spock, Sarek and Amanda. Its amazing to me that after 25 years or Star Trek dorkiness, I am still seeing publicity photos from the show that are new to me.

and what's a little frustrating to me is just how many probably amazing publicity shots still remain in the vaults that we may never see... I wish some fan familiar with what has been seen, versus what hasn't, could pick from the archives at Pramount a whole coffee-table book's worth of heretofore unseen, or at least rare, publicity stills.

One can dream, can't one?

Frederick, I would absolutely buy a book like that for a greenback dollar.

I loved the picture of Sulu jumping over the leftmost column on the cover of Monster Times!!!