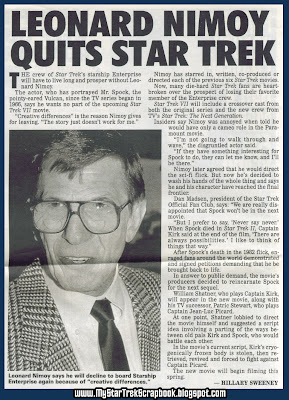 And not a moment too soon.
Leonard had the right idea when he declined to be involved in "Generations," the first TNG movie made. If only Shatner had felt the same! Clipped from the National Enquirer early in 1994.

The time frame for this is much more recent than most items, but since I have so many articles from various years encompassing the entire span of Trek history, I thought I'd begin mixing them more. This will avoid the problem of using up all the old first and only posting the more recent as time goes by; I'd like to be able to post old and new and inbetween as long as the blog goes on. So, in coming posts, look for more entries of later items mixed in with the earlier.

Bonus from the Scrapbook: Below, a bit of history... an actual teletype machine printout from the wire service United Press International about the con known as Star Trek Chicago '75. 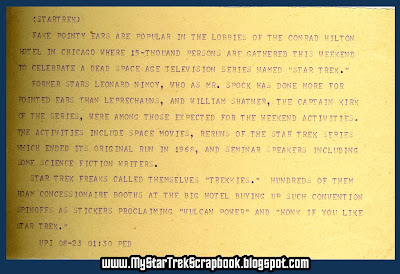 Held at the Conrad Hilton in Chicago, IL, August 24 - August 25 1975, and billed as the first "professional" Star Trek Convention, this two day event was packed with stars from both the crew of the Enterprise, and the science fiction literary world as well. In addition to every regular member of the crew and several other actors, Harlan Ellison, Robert Bloch, Hal Clement, David Gerrold and Phil Farmer were all featured guests. An earlier post featured a newspaper clipping that used some of the above UPI copy in an article on this event. 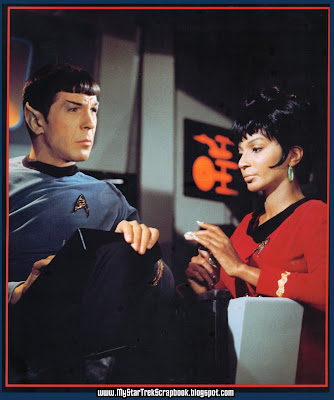 Her considerable charms wasted, Uhura was reminded of her grandma's old expression "water off a duck's back."
Posted by Frederick

I have always loved that picture of Spock and Uhura. They both are very beautiful in it. Dig Uhura's silver nail polish. Only Nichelle could make that look chic.

I wore silver nail polish for a couple of years in high school because of her. It was a chore to find it, too! (girl6 - love your avatar - The Balcony is on my Netflix queue!)