Daredevil of The Skies: James Doohan

From issue #146 of Starlog, published September 1989, comes this article on everyone's favorite Engineer, Montgomery Scott. Or to be more accurate, the much-loved actor that brought him to life, James Doohan. It's interesting to learn that, but for being hired a day or two earlier for Trek, he might have become the engineer of the Seaview. Fate was kind to him (and us) by beaming him up before he could take that voyage to the bottom of the sea into obscurity.

It's also revealing to see how he and the other secondary cast members were chafing at the meagerness of their parts in ST 5, which was thanks to the ego of the director, who just happened to be the star. It's my outlook that giving an egotist like Shatner the directorial reins of a film he was also starring in was like giving the fox the keys to the henhouse. (No offense, Bill, but your talent for self-promotion was often at the expense of your co-stars, and nobody likes that.)
(Click on images to enlarge.) 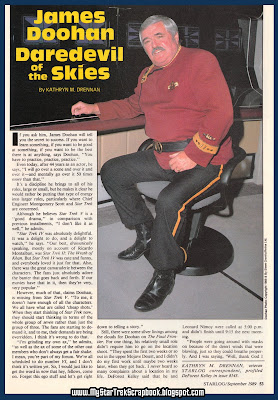 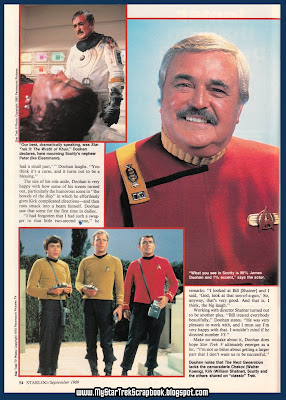 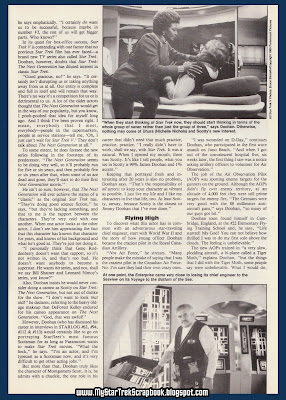 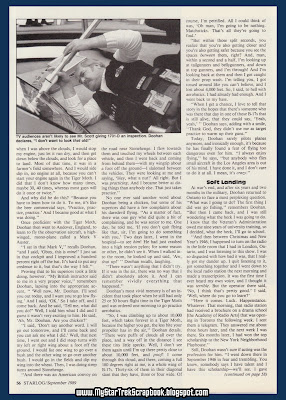 One amusing bit from the article is when Jimmy says he would never guest-star on "The Next Generation," but we all know he did later. He didn't want to have to appear older through aging makeup, but when they found a way to get him in that century without aging him, he was ready for it! I'm glad he did it, it was a great homage to him.
Bonus: Below, a vintage photo of Bill Shatner from a TV/Movie magazine around 1967. 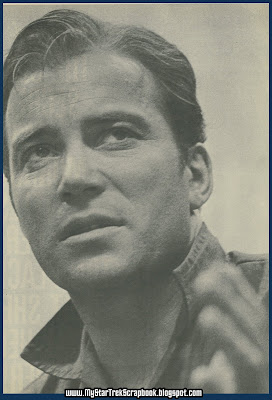 "I don't know why the extras like Jimmy and George hate me, they get to bask in my stardom!"
Posted by Frederick 7 comments