The Kiss concert goers, in a drug-addled fog, accidentally came to the convention hall on the wrong date; and they didn't know the difference. The Star reporter apparently didn't either.
This article, clipped from "The National Star" tabloid, is the absolute worst (but typical) of the kind of scornful write-up that the Trek fandom phenomenon received in many publications.

Look at that opening line! "Like lemmings clawing and squirming to be the first to drown, almost 15,000 true-blue Star Trek fanatics swarmed over New York Americana Hotel last week." Insulting, and just the kind of ammunition my parents liked getting to ridicule me for being one of the fans. But, that kind of writing is the bread-and-butter for most tabloids, back then as well as now.

Reading between the lines, it seemed that everyone had a good time at the convention, especially those that enjoyed grokking the slinky Green Orion Slave Girls. And I bet the fan that won first place with the Horta costume still treasures the memories, and shows pictures of the event to the grandkids.

Below, another convention article, this time for one in Chicago. 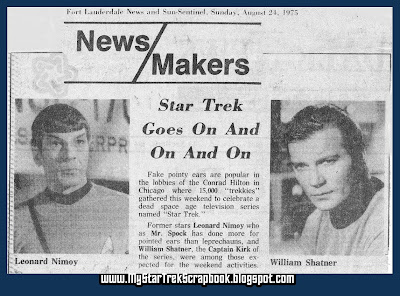 Star Trek In The Comics:

Oviuosly spike a is a star trek fan

Thanks Fred, these old news clipping really are so fun and inspirational. They're like witnesses from time.