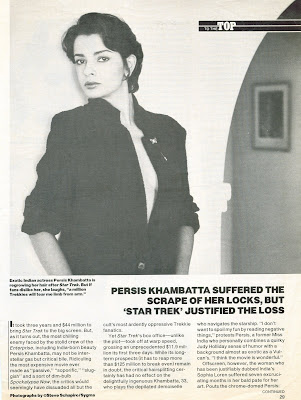 Clipped from "People" magazine, January of 1980. 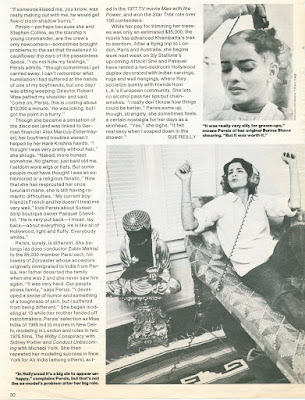 Not a lot of commentary today, since the character really didn't do a lot for me except take screen time away from some of the secondary characters I would have rather seen more of. But, she was in the movie, so I clipped her articles as well. Her role in the movie was somewhat of a mystery, since her "oath of celibacy" line went completely without any explanation. It seemed out of place without some reference, as if all officers had to take one, and would have been better left out, I thought. Unless one read the novelization, and knew her species attitudes toward sexuality, and extra-strength pheremones, it made no sense. And neither did Sulu's awkwardness over her. Thankfully this aspect of her race was not carried over when the character was recycled to become Deanna Troi on the Next Generation.
Below, a newspaper article about Persis, from Dec. 12, 1979. Her passing away in 1998 was a tragic and early end to what had begun as a promising career in international films.

Below, some publicity photos taken of Persis showing off her smooth and shaved look. 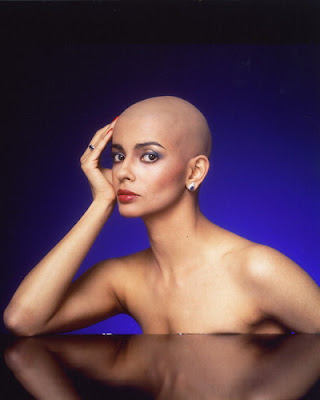 As for question number one, "No, it is not."
And for number two, "No, I will not put them on the table." 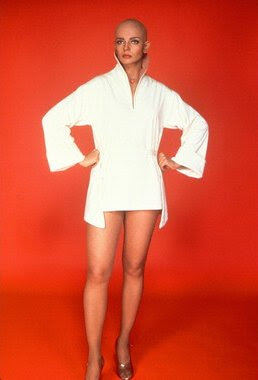 Below is a test shot of Persis in a bald cap and original series uniform, taken when she was to play the character in the planned "Phase II" tv series, before it was upgraded to a theatrical release. 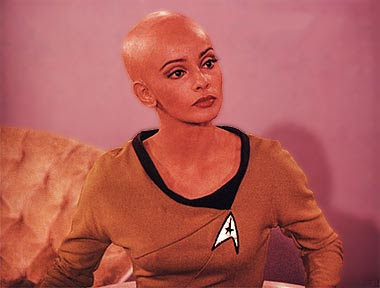 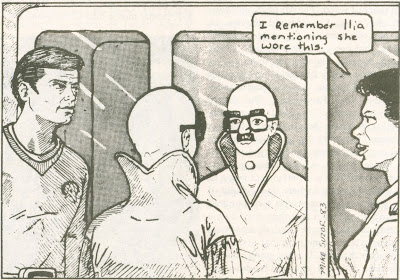 Its a real shame no one ever used the Deltans again as anything other than crowd scene filler. Gene provided a fair amount of backstory for the race in the Phase II bible, setting them up as sort of the anti-Vulcans, at least insofar as they embrace emotion and sensuality and physical experience. It would have been nice if a Ron Moore of an Ira Behr or a Michael Piller had taken it upon himself to make the Deltans as developed as the Ferengi or the Klingons or the Bajorans. I would certainly have found a depiction of a sexually evolved and complex Deltan crew woman on, say, "Voyager" or "Enterprise" much hotter than just sticking some chick with big lips and/or boobs in a catsuit every week.