From a 1976 teen magazine... interesting coverage of a NY con, with an awesome bridge set! 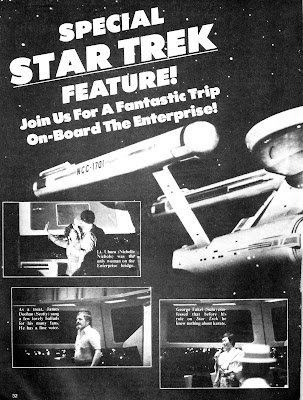 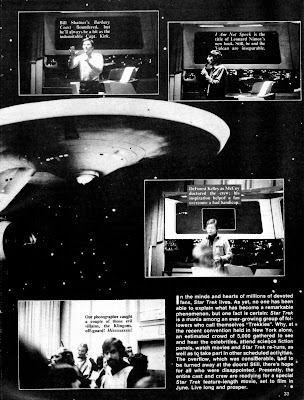 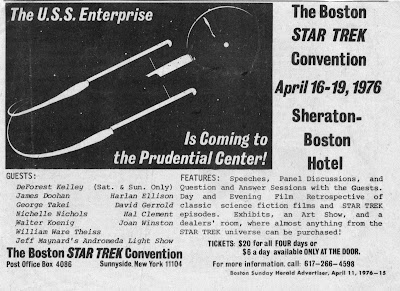 And a clipping from a 1976 newspaper about a convention coming to the Boston area.

The early and mid-70's were the glory days of the Trek conventions. I lived them vicariously through the magazine and newspaper articles I found concerning them. Although isolated from other fans, I felt a part of something just by reading about them. We all shared a love for the same thing, and there was nothing else like it!

The third issue cover of the much-loved Starlog magazine, scanned in below, captures the excitement and hero-worship of these early conventions! 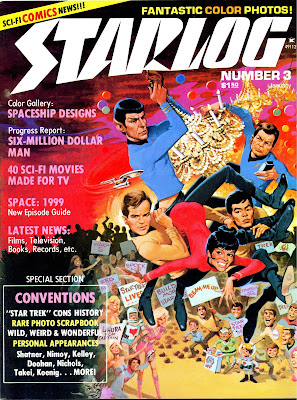 No doubt I was at that New York convention profiled in the article. There were two big NYC cons that year - the February con run by the legendary Committtee (which was their last) and the Bicentennial-10 con the following September. The bridge set replica was probably one built by super-fan Michael McMaster; he had a bridge set he'd truck from convention to convention. He even published blueprints for the bridge, much like the Franz Joseph blueprints that were printed in the mid-70s. Unfortunately, Mr. McMaster never lived to see any of the "Star Trek" movies; he was killed in a car accident in 1978.