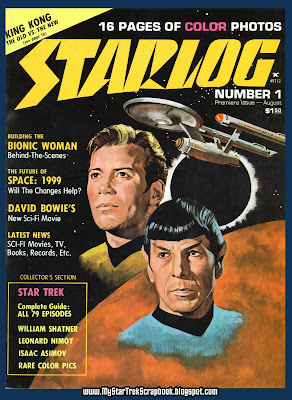 Published in August of 1976, this magazine was like finding an oasis of Trek in the media desert. I would say it was probably the highlight of that year as far as finding Star Trek material, devoted as it was to the 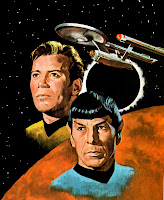 show with COLOR photos (Eeeeee!) in the middle, an episode guide, interviews and more. It was like a Trek convention in my own little room. I was 18 years old at the time, going on 14.

If my discovery of the Gold Key comics had been my first kiss in trekkie-dom, and the various Blish adaptations like infrequent dates, then this magazine was like getting to third base. (Obviously, I didn't date real girls very much. There were no PCs at the time so nerds were not as popular as they are today; back then there was very little use for them.)

Walking home to my Fort Lauderdale house with that issue in my hands, I was almost trembling with excitement and happiness. After the usual sneaking-it-past-the-parents routine, I sequestered myself in my room, donned the grapefruit- sized earphones of the time, and listened to my disco music while I absorbed the magazine. I still have the issue, along with many other issues, and it still invokes the way I felt back then whenever I come across it as I go through my collection cases.

Does that seem strange to you, as you read this? Or can you relate to it? I'd love to start getting a little feedback in the comments section to let me know if any of these posts are connecting and triggering memories of your own. My counter tells me people are coming, but hardly anyone comments, and I'm feeling a bit like I did in 1971 when I thought I was the only Trek fan in the world.

Below is an ad that came in my AMT Enterprise model kit in 1975. I saved nearly everything. I never ordered them, of course; my walking into the living room wearing a T-shirt with a Trek iron-on would have been like walking into a Klan meeting wearing a MLK button. 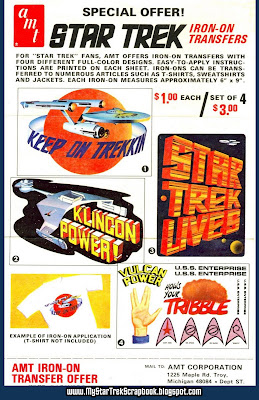 And below is a pen and ink of the lovely but dangerous Mirror Uhura that I did back around 1978. I based the body on a pose in an art book I had. I was experimenting with using shading film to darken certain areas at the time, but I wish I hadn't, as over the years it yellowed, and shrunk awy from the edges. Now artists can shade areas with the click of a mouse. 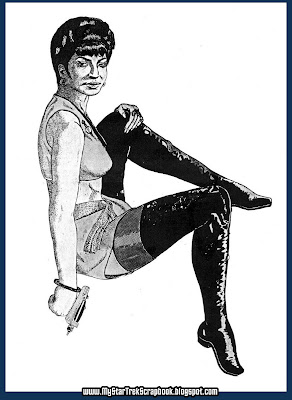 I was shocked to find the Star Trek poster from the old issue of Starlog.
I used to buy SL when i was a kid and i sold off my collection over 10 years ago.

I've been looking for that poster for about 4 yrs (don't think you can get it) and i was going to buy the SL #1 at a comic book convention and photoshop it and make my own poster but the issue was to beat up to do so.

Glad you liked the post! And glad I could help you find something you wanted. Hope it's high enough resolution to look good when printed.

Come back soon, more stuff like that is coming!

I know the feeling of those doldrum years of fandom when there was little to nothing on the market for geeks and nerds to sate their sci-fi thirsts.
This is a great place to glimpse another fan's pieces and scraps of gathered memorabilia.
Keep bloging!

I WAS ABSOULOUTELY AMAZED LOOKING AT THE NO 1 ISSUE I THOUGHT I WAS THE ONLY ONE LEFT IN STAR FLEET THAT WOULD HANG ONTO AN OLD LOG BOOK MINE HAS BEEN WRAPPED IN PLASTIC AND PAPER FOR THE LAST 30 YEARS BUT YOU INSPIRED ME TO DISPLAY MY CENTRAL COMMAND LAST FLEET OF SS ENTERPRISE:S.

Love the iron-on post, Frederick; after a summer of begging my parents to let me order the iron ons,they relented - it was with great excitement that I opened the package 4-6 weeks later. The iron ons were a little smaller than I imagined they would be, and after a couple of washings they wore off. Still, there was nothing more exciting for this 10-year-old than to wear a command insignia on my T-shirt breast pocket for a few days.

I came from a slightly more "liberal" home than you did, but I fully understand what you went through - my parents allowed me to watch Star Trek, but they considered it childish as well and worried that I was a little too much into the show. While they let me purchase Star Trek model kits, books, posters, etc., they weren't keen on letting me bring any of it out of my room; in fact, whenever there were guests, my parents always came up with an excuse for why I couldn't watch Star Trek in the living room. They're attitude was sort of "We're enlightened enough to tolerate this obsession of yours, but let's show some discretion in public, please."

Thanks for the comment, and for sharing your memories and situation! I enjoyed reading about how your family dealt with the fact that their son was a trekkie!

Sounds interesting! email me at fred_trekker@live.com and tell me a little more about the project it will be used on.