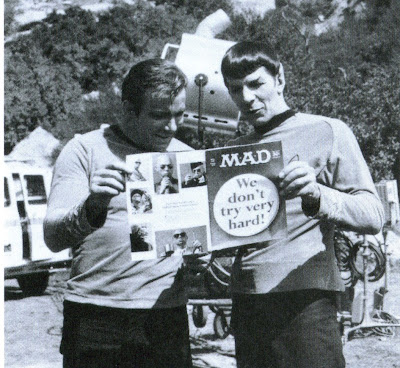 Shatner and Nimoy have a laugh at their expense during filming. 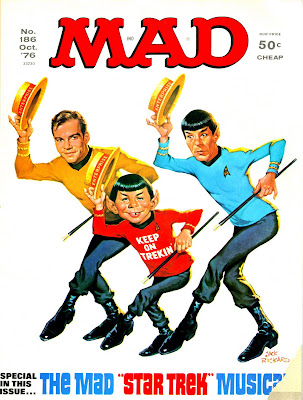 In October of 1976 I found this issue of Mad which featured an awesome Trek spoof, "Keep On Trekin': The mad Star Trek Musical," one of many Trek parodies they did. I have just about all of them, from the first onward, and I'll feature them all sooner or later. But this one had an awesome cover painting, one of my favorites. As always, click on the images to view the Angry-God-Apollo-Sized scans. Enjoy! 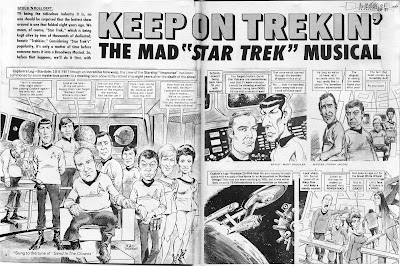 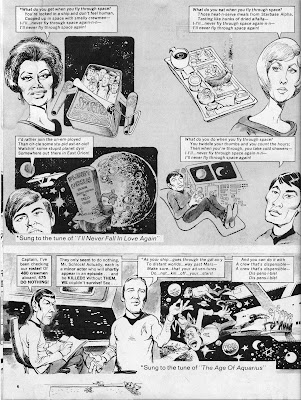 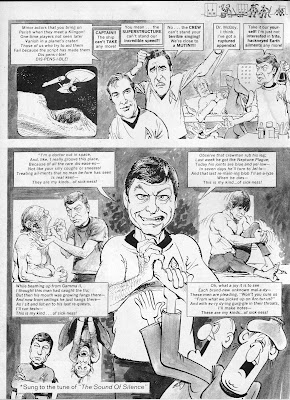 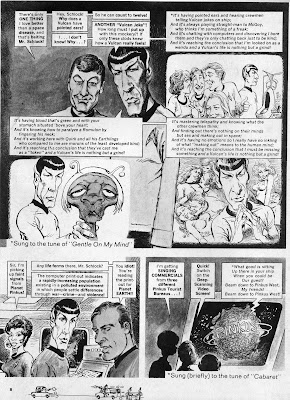 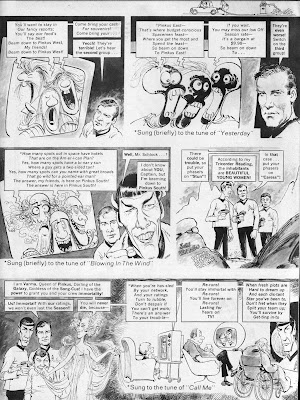 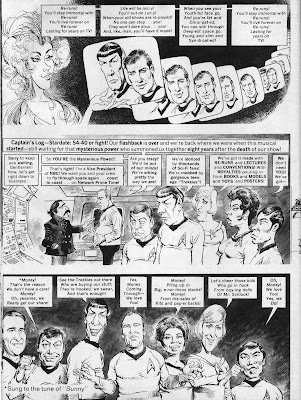 So the other day my brother calls me and tells me he heard "Yesterday" on the radio and thought of me. He asks me, do I remember "Pinkus East" from the MAD Magazine Star Trek parody issue, when we were kids?

Naturally I do and I recite the first verse for him. His wife is laughing her ass off and calling us "dorks" in the background as my brother finishes the song.

I then Google it and order him a copy of the magazine for his birthday next month. Let the circle remain unbroken!

Hi Frederick,
Do you have the MAD Magazine shown in the Shatner/Nimoy picture? Could not find it on your blog. I've just posted the comic strip to my Journal, but the quality is not that good. Anyway, if you want to check, here is the link: tintorera.livejournal.com/4463.html

Thank you Thank you Thank you for posting this!!! I was 12 years old in 1976 and my friends and I had a copy of this Mad magazine issue and would sing the songs incessantly!!! I still remember most of the lyrics. It was so great to be able to see this again! Live long and prosper!

Ann,
Glad it brought back good memories, and was enjoyable to read again! I loved it too, this was during the time when Trek stuff was hard to come by and things like this were a real treat.

Thank you for sharing this! My favorite, by far, is "Dispensible."

I had the Mad "Star Trek" musical issue too; it was hilarious. Maybe I still have it, but I've moved so many times since 1976 (not all of them of my own choosing) I'm not sure. I got a kick out of Mort Drucker's impression of a balder, heavier Shatner; that first panel, with him in the captain's chair, gut and all, says it all. (By the time "TMP" was filming, two years later, Shatner went on a crash diet to stay thin).

I loved 'Send In the Crew' a lot, and rediscovered the song 'Send In The Clowns' because of it-thanks for posting this.

I'd like to think that I may have spurred this piece. In 1973, I did a feature for my college magazine on the NYC Trek convention. In 1974 I began a friendship of many decades with Jerry De Fuccio, Mad's associate editor. Before dinner in Manhattan one evening, he took me to the MAD offices and introduced me to the Gang... After 1973, as a fan of the musical Baker Street, I had come up with an idea for a Star Trek musical based on The Trouble with Tribbles, which included original songs and lyrics,"We Got Trouble, with Tribbles, Terrible Trouble with Tribbles..." as well as solos by Spock and Chapel about unrequited love. As a young adult, I didn't have any Broadway connections then, but I shared many joyous things in my life with Jerry, including music and Star Trek. I wouldn't be surprised if this satire was triggered by my rabid fandom of Trek in the 70s. Ironically, I actually dated a Broadway writer producer in the 80s, but, timing is everything. I did go on to co-write Elementary, My Dear Spock in the late 80's--now a free ebook at www.extremelysmartcom/magrathea, several award-winning mystery thrillers in teh 19902-2010s, and The Zygan Emprise Trilogy, inspired by Trek and Holmes, as YS Pascal. (99 cents on kindle.) Jerry sadly passed away in 2001. Those were the days.