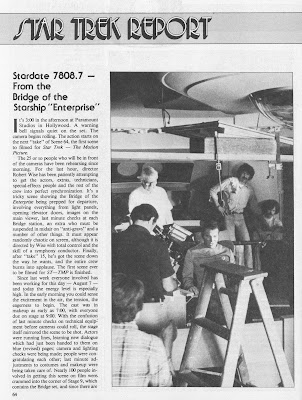 Scanned from Starlog issue #18 in December of 1978, this article relates the events of the first day of filming on the new movie. Each month Susan Sackett, Gene's assistant, would contribute a column to the magazine keeping fans apprised of the movie's progress, and this insider's view was one of the main ways we Trekkers kept up on the details of how this long-delayed project was coming along month to month. 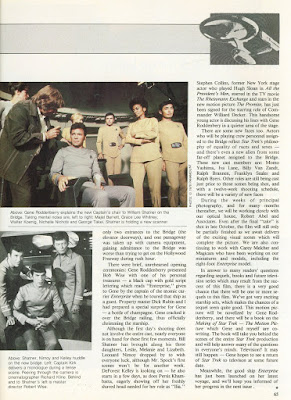 The photo in the article was too good to pass up using for a captioned humor piece... 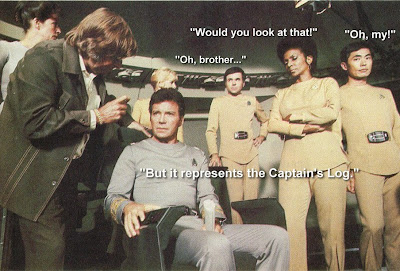 Gene tries to convince Bill that he can't pose like that due to the film's "G" rating. 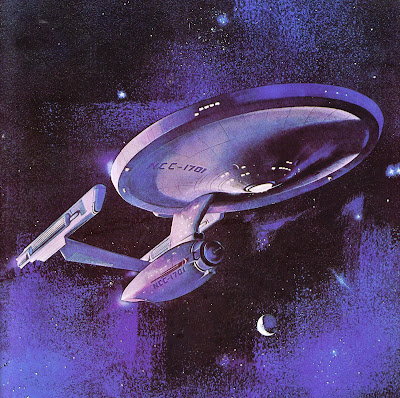 Below: The crew gets together for the grand opening of the new Star Trek display at the Hollywood Movieland Wax Museum, circa 1978. Sadly, the museum was closed in 2005, and the figures sold off. Read about what happened to the bridge crew here... it's a happy ending with lots of pictures. 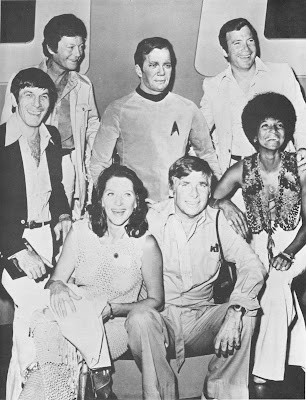 Spot the real Bill Shatner and ignore the fact that Nichelle went braless that day.

And finally, below is the first drawing I did of the good captain when I was 15, in 1974. Shatner was always a hard one to get right for some reason, as the many action figure face sculptures will attest. 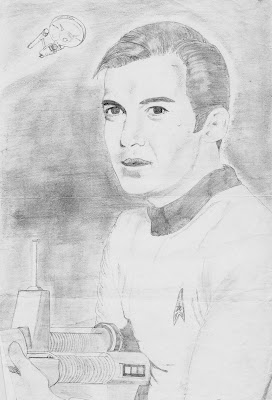 Your Shatner looks at least as much like Shatner as the wax Shatner!

Thanks so much for the link to the wax museum figures site. Great story and great photos of all the Trek luminaries posed with them.

Regarding the Starlog article, did Starlog recently cease publication? I'm surprised they survived as long as they did in the Ain't It Cool News era of instant information. I remember scanning Starlog and other publications every month for the lastest I could find on whatever the next Star Trek movie was supposed to be at the time. Some things have changed a *lot* in 25 years.

I hear ya, Jay, and Starlog is indeed gone as a newsstand magazine. I think the last time I bought an issue was 1996, but I loved it in the 70s and early 80s, along with Cinefantastique.

At present, the only "real" zines I buy are FilmFax and Shock Cinema, and I'm waiting to find out when FilmFax has ceased publication. At $9.95 for a pulp paper magazine full of ads, it's an expense that has become hard to justify.

While not strictly about sci-fi but more for fans of b-movies and exploitation films, at least Shock Cinema is independent, edgy, funny, and at $5, cheap! And the interviews are terrific and not so "cookie cutter" style or press release bland as Starlog's.

Yep, it was a sad day when Starlog finally folded, but I hadn't bought an issue in years. Which is probably part of the reason it had to shut down; so much free info online that magazine publications like Starlog and others are struggling. But at one time that mag and a couple of others were my link to the world of sci-fi.

These are great... I've been looking all over for the issue which had the sidebar of the picture of the crew who built the enterprise model posing around it... do you have that one? It would be a nice counter to the "Director's Edition" fx crew photo I put up last week...

Thanks for stopping by! I'm going through all my old Starlogs for stuff to post, so I'll keep an eye out for that and post it when I do!