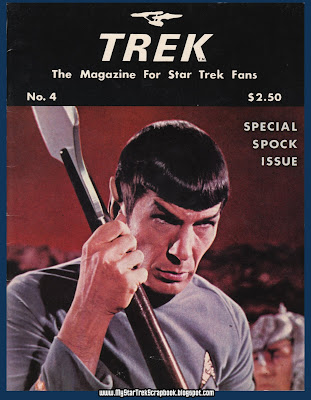 Gaze at this image for a moment and that music will start to play in your head.
Although I didn't attend them, reading about the early Trek conventions was exciting! Here was proof that others loved the show as much as I did, and that I wasn't the only one! (It's funny to think back on my earliest days as a kid when I first discovered the show, and thought I was the only fan.) Here is a first-hand account of the 1975 New York Star Trek convention, written by James Van Hise, who went on to publish and edit his own fanzine, "Enterprise Incidents." Many fans know him as the writer of a large number of unofficial Trek softcover books that had national distribution. The con report comes from issue #4 of "Trek: The Magazine For Star Trek Fans," printed in March of 1976. Incidentally, this was the first issue of the late, great fanzine that I ever saw or bought. Up til now, all the magazines and such I had bought only featured Trek now and then, but this was the first magazine of any kind, professional or fan-produced, that I had found that was devoted entirely to the show. For me, this was Nirvana. I have such good memories of the excitement and happiness that reading it brought to me at the tender age of 17. The fact that it had color covers and it was printed on card stock made it all the more special. 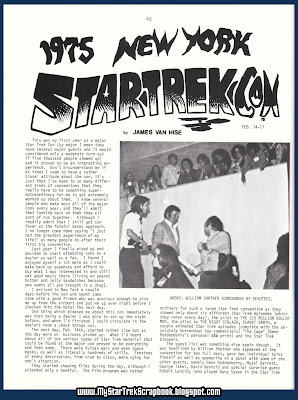 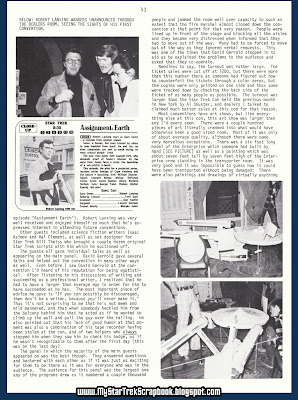 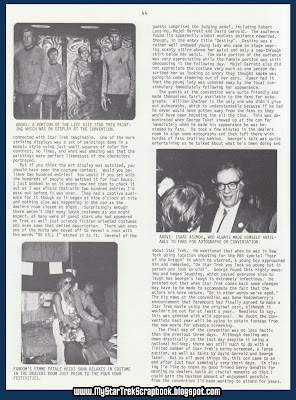 Bonus: a UFP patch that was on a hat I ordered back in the early 80's. The hat wore out but I took off the patch and saved it. 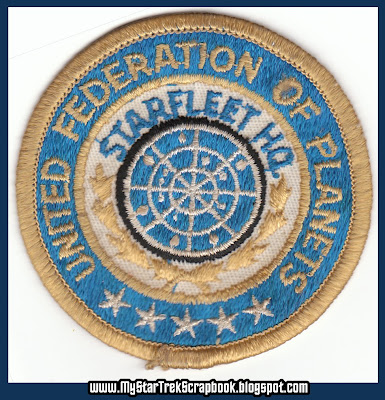 Bonus#2: Below, the cover of Blish's ninth ST adaption, featuring a painting of the Enterprise by an artist that would go on to do many more covers of various Trek novels. The depictions of the ship by this artist were more accurate than the ones on the earlier covers, and it was featured more prominantly. Boy, those were the days, whenever I found a new edition of these books. I pretty much bought them in order of publication, and eagerly awaited the next edition. 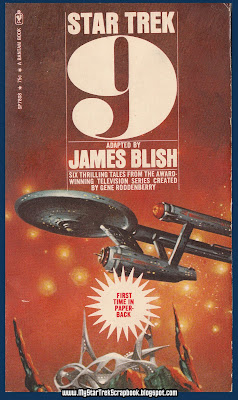 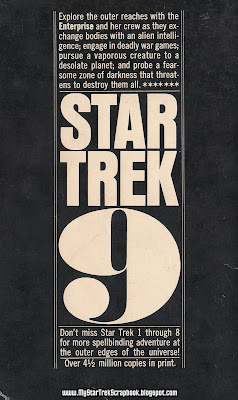 Now, I know that the Blish books are not rare, or hard to find images of the covers online; and that most fans are so familiar with them that there might not be much point in posting them here. But, these are my copies, and they meant so much to me at the time I bought them, and mean a lot to me now for the memories they hold; thus the reason for including them as bonus items. I enjoy sharing those memories and enjoy reading when commenters share their own.

Bonus: Below is one of several ad fliers Paramount distributed to sell the show abroad in the 70's. This is a from an article about foreign Trek material in the Trek Special #2 published in 1978. 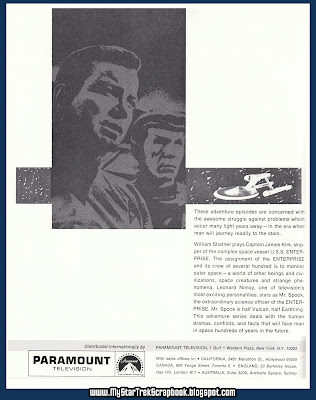 "Look, Larry, it might be true that is space there is no up or down, but that excuse won't fly here. Just admit you made a mistake when you did the layout."

I love seeing the old books here in large scans. They bring back classic memories for me as well. I also remember an article in People magazine in the 70s sometime about Trek fans (I think) and they showed a couple in repro costumes. The lady was holding a replica communicator, which totally freaked me out. I wanted one so much as a kid that I often dreamed I had one. I had no idea you could even get them in "real life." But at 8 or so I had no way of finding out how she got one. I kept that article for years...burning with jealousy that she had a communicator prop.

Thanks for commenting! I too dreamed about having the "big three," the phaser, communicator and tricorder. I had to settle for the kid-sized toy Trek "utility belt" version, but I was older, a young teen. I imagine being as young as you were at the time, that it seemed an unattainable fantasy! It's funny that I finally did get full-size replicas only as an adult in recent years, and they still brought me a lot of joy, but I can only imagine had I gotten them when I could run around in the woods with them, on a "landing party."

I had that "exploration set" that I had to build myself. I was probably 8, so all three came out looking terrible. I hated that the communicator didn't flip open like it did on TV and that it had a silver flip top. Of course, I played with it so much anyway that it literally fell to pieces. Naturally, I have several communicators now including one from the old Roddenberry Lincoln Enterprises catalog.

Man, can I ever relate to your stories! I was 15 when I became a fan in early '75. During my senior year I was elected class clown. (Comedy had become a clumsy coping strategy in my struggle with shyness.) Prior to the election, I was to appear on stage and desperately wanted a costume with phaser for the event. As a penniless teen, the best I could do was a command insignia patch which my sister kindly stitched onto a jacket.

And you keep posting those Blish covers, Frederick. There isn't a one of us who doesn't get misty-eyed over them.

It's funny, but I compensated for lack of social skills by being something of a class clown also. I was "the perpetual stranger" in school because my stepdad made us move on the average of every three months or so. I went to about 20 different schools growing up.

In high school, I usually made some Trekker friends when we discovered that we had something in common. It was an instant bond!

Thanks for sharing your memories!

That "flyer page" is later than 1966 and is from Paramount Television not NBC.

Paramount/Gulf-Western bought Desilu in mid-1967, any sales material before then would be Desilu.

Thanks for catching that, I looked more closely at (interpreted, I actually looked at) the description on the opposite page of the Trek mag it was printed in. I have corrected it in the blog.

I was at the '75 convention. Robert Lansing showed up for one day, and decided to stay for the whole convention; he was having such a good time. William Shatner made his first convention appearance there. According to the late superfan Joan Winston, who was one of the organizers (and wrote a book about the making of the cons) Shatner was staying with friends in Brooklyn, and took the subway to the convention hotel (the Commodore, on E. 42nd Street). He rode the subway unnoticed.

Anon,
Thanks for commenting and sharing you memories of this legendary con! Wow, what a great recollection. I do have the Joan Winston book, I'll have to take it out and re-read it again!

One other thing - The Committee's conventions were the only ones (at least of the conventions I attended) to run the Blooper Reel with the third season bloopers. It was hilarious watching DeForest Kelley blow his lines during the filming of a scene from "That Which Survives". Or a half-black/half white Frank Gorshin say "I am 'Belly'. No I'm not". The Blooper Reels were originally made for the wrap parties at the end of each season, but they became one of the highlights of the conventions. IIRC, Robert Wise never saved any bloopers from "TMP". Maybe Grace Lee Whitney (God rest her soul) was right - Wise probably had no sense of humor. There may have been blooper reels from the rest of the movies shown at cons, but by that time, I had stopped going to them.