From issue #28 of Enterprise Incidents (after the format change and national distribution as a sci-fi movie magazine) from April 1985 comes this behind-the-scenes article on the making of the effects for Star Trek 3. I do remember that the anticipation in my mind was much higher for #3 than it was for #2... there seemed to be very little advance publicity for TWOK, except for the furor over the leaked death of Spock. But after the movie was released and so well-received, the fan excitement over the third one seemed to be increased and there was much more in the media about it as it was being made. 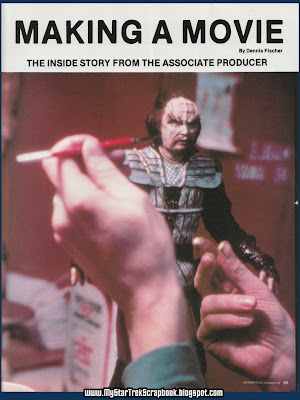 This Kruge miniature was used for the scene where he plunges into the abyss on New Genesis... the cut between the actor and the animated figure was disguised by a flash of lightning. 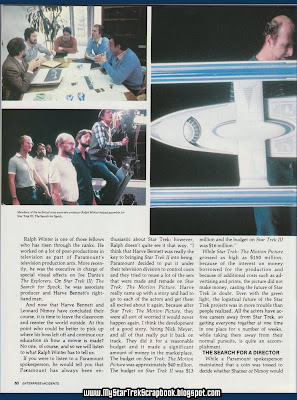 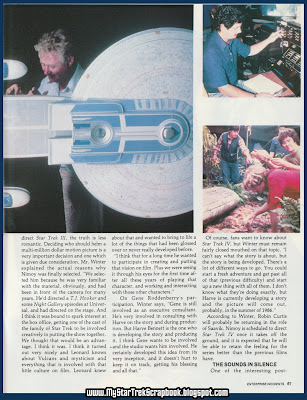 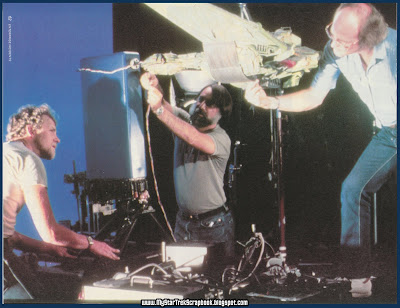 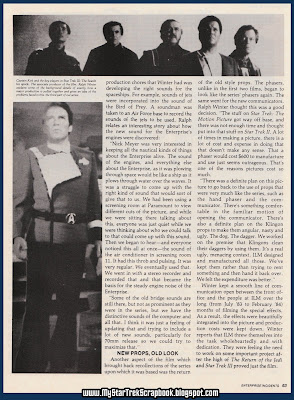 Below is a detail from the 2-page spread put back together. I didn't want to shrink down the spread by showing both pages connected, so I scanned in the one photo that went across both so you could see it in its entirety. The detail visible on the scale model of the Excelsior is interesting to see, since we didn't get to see it much on screen in the movie. 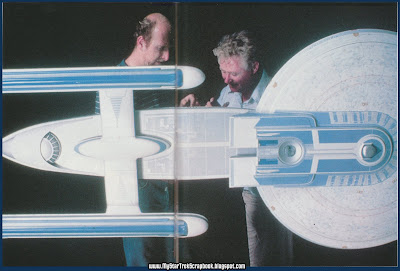 It was still an ugly ship, though.
Posted by Frederick

I still haven't figured out why STIII is lumped in as part of the "Odd-Numbered Curse." The story (while not as strong as STII) holds well, it has great action sequences, a good villain, pretty good chemistry, great model work, great VFX (especially Spacedock, Genesis exploding) and drama.

Nice article. The Excelsior isn't all that bad, even if she is a bucket of bolts!

EJK,
I agree, I don't think the odd-numbered curse came into being until #5. #3 was closer in look and spirit to the TV show than the previous two, and more about action taken for the sake of friendship than reacting to acts of revenge. Khan drove the plot in #2, while Kruge was just an obstacle to overcome in the quest to get Spock taken care of in #3.

Thank you very much for posting this article, but the Excelsior is GORGEOUS! One of my favorite designs from Trek. Great to see the original topside of the model before it got turned into the Enterprise-B model for Generations. The "Stealing the Enterprise" scene is my favorite of the movie, but the whole movie is good, it's just is a victim of living in the shadow of Wrath of Khan.

Keep up the great work, and thanks!

Thanks for posting, I'm glad for your enthusiasm! Beauty really is in the eye of the beholder. Maybe I was predjudiced against her, and saw her through Scotty's eyes, because she was touted as the replacement for the Constitution Class, or Captain Style's arrogance... or because I thought her secondary hull resembled a toilet bowl... but you saw her through Sulu's eyes, obviously! He was smitten with her because he was slated to be her captain, which was delayed due to the Genesis affair.

I've always thought the Excelsiro (and Enterprise B for that matter) just looked like fat, bloated versions of what could have been. I much prefer the sleek Enterprise C (was that Ambassador class?) and the Enterprise E. The D model looked so-o-o-o cool at first but quickly started to look dated, but it became a victim of its own success due to the popularity and longevity of the series...I wonder how fans would take to a new model Enterprise half way through a show's run...wasn't that what was going to happen with the series Enterprise? The ship getting a redesign?

Thanks for the Blog, read whenever I can and usually several times.
Jonathan

I have always thought that the ship was intentionally designed to look bulky and ungainly so that the viewer would not want to see it replace the Constitution class. If it was being presented as the actual replacement for the Enterprise, they would have taken care to make sure it looked even better or neater. I think they made it ugly on purpose. I admit some people love it, but I really don't think we were meant to.