From Issue 30 of Starlog magazine (see the cover and another article here), published January 1980, comes this interview with the production designer of ST:TMP, Harold Michaelson. Michaelson took the existing Mike Minor designs for the new warp core from the planned "Phase Two" series and expanded it vertically to encompass multiple stories, as well as horizontally. The now-familiar design has been the design basis for every new show and movie ship's engineering deck... with the notable exception of the one movie that really could have used it... the recent '09 reboot. The money-saving use of a beer factory as engineering was nearly universally lambasted by fans, and hopes are that the producers of the sequel will listen to fan feedback and give us a real engineering room set, one befitting a big budget. 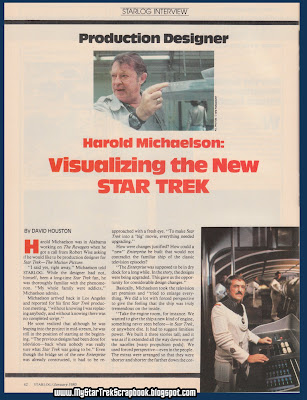 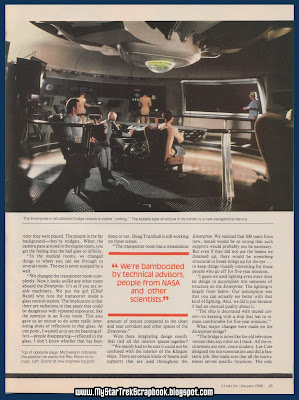 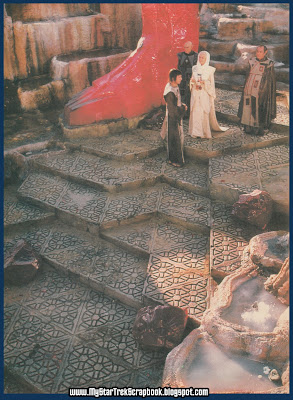 "Whatever thou doest, Spock, dost not look up, lest thee seest up the robe of Surak." The caption for the top photo is in error, as the ship on the design board is actually the air tram and not the Vulcan shuttle. 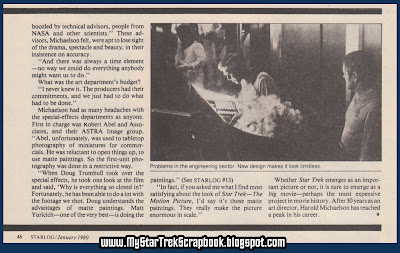 Bonus: Below, a fun video promoting the Star Trek "Battlestations" slot machine game. Since I don't anticipate ever going to Vegas, and I don't frequent casinos, this is about as close as I'll ever get to this game... but it does look like it would be fun to play. If I ever get rich, I might order one for my game room. The copy promoting the machine is under the video. Go to Youtube to view the video in larger format: http://www.youtube.com/watch?v=QpGN0ixpErU

The game pits up to four players against the Klingons in a space battle between the United Federation of Planets and the Klingon Empire; complete with voice-overs from original show stars William Shatner and Leonard Nimoy.

Casual and obsessive Trekkies alike will love the new STAR TREK slot game from WMS. Whether you just watched the TV series occasionally or can identify STAR TREK episode numbers and recite the command structure of the Romulan military, STAR TREK™ BATTLESTATIONS! will bring the popular TV show to life at a casino near you.

Say what one will about the budget, direction, costumes or story, the production design set the Trek standard for the next 20 years. And TMP still holds a place in my heart despite its minor flaws.

I would agree that there were several problems with TMP but it continues to be visually stunning! Some of the later films lacked the grand scale but were superior! Love the blog. Check out my blog "The Star Trek Workout"

I feel the same way about TMP, it holds a special place in my heart as well. 30+ years of people complaining about how slow it is (most recently, a Kevin Smith video where he says the same), and people complaining about the length of the drydock sequence. Now, I can somewhat understand that, since not everyone loves the refit design or great modelwork like me, but seeing that gleaming ship with that Jerry Goldsmith music playing is fantastic... I would love to see TMP re-released in theaters (no 3-D!!!!).

Another thing that fascinates me about TMP, and this relates to this website, is the information that I still discover about it. The amount of work and behind-the-scenes stuff that I still uncover about it, here, 30+ years later... it's crazy. The trouble with deciding on the story, the effects work problems, all the recollections and stories from that time are so intriguing.