(Don't strain your optical orbs... click on images to enlarge!) 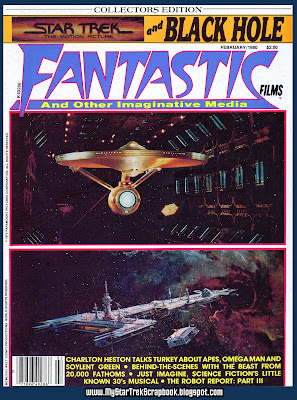 On December 7th, we saw the 30th anniversary of one of the most anticipated movies (at least by me) ever made ... the majestically-titled "Star Trek: The Motion Picture." Long on effects and ideas, but short on actual motion, the movie was like a slow and loving camera trip through an art museum to linger on the masterpieces. Very beautiful to gaze at and appreciate, but only good if you love art, have plenty of time and are patient when it comes to your thrills. I enjoy the better-edited and more complete Director's Edition much more now than the original release.

The article scanned in this time is from "Fantastic Films" magazine, a high-quality publication a bit below "Cinefantastique" but above "Starlog." The interview with Harold Michelson is a nice look at what went into the look of the movie, with some good behind-the-scenes images.

I've been posting these articles and clippings about the first Trek movie for awhile now, so if you want to get caught up with the history of the film's release, follow the "ST:TMP" tag and the "first movie" tag. Reading over them, I hope you recapture your own sense of excitement, or at least see what it was like for us fans back then.

Thirty years.... just doesn't seem real now. The movie seems to be holding up better than I am. 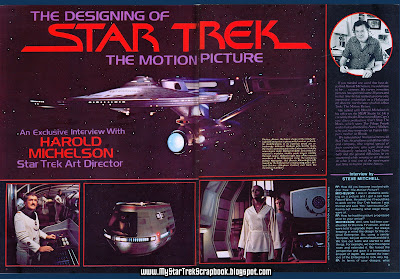 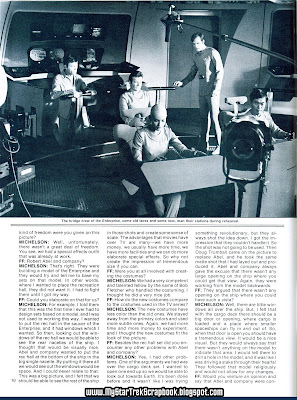 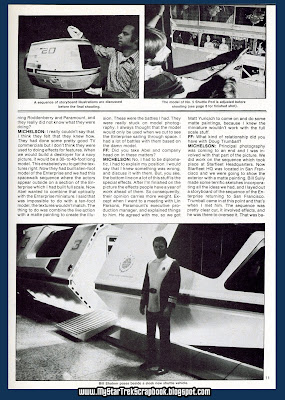 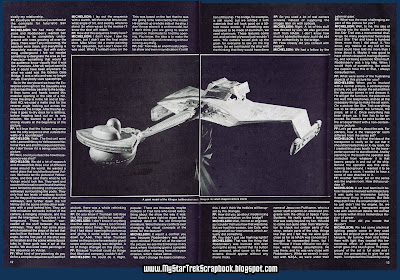 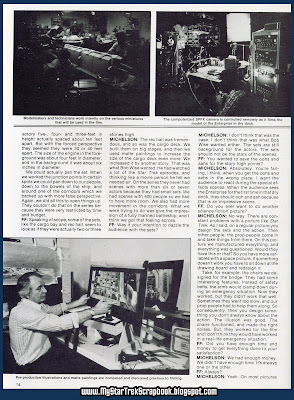 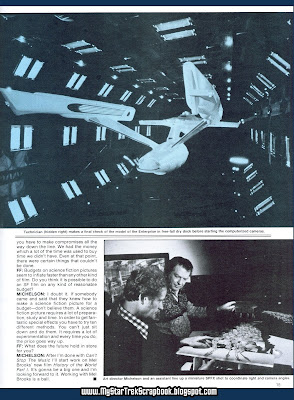 "The Black Hole," also featured on the cover, had a lot more action, even though the story and effects were on a grand scale like "TMP," so it could have been done. I've thought before how neat it would have been to combine the two; using the story of "The Black Hole" as the basis for the new movie. I think it would have been a fine Trek movie and much more exciting. Adapting the story for Trek could have eliminated some of the poorer elements of both: "TBH" could lose the shallow characterization and dialog, and "TMP" could lose the mind-numbing flights through effects for a let-down ending.

Seeing Kirk match wits with Reinhardt's massive mind and ego, and the crew having to fight their way out of the collapsing Cygnus... the new Enterprise dragged into the black hole also, but protected by Spock's application of the new shield technology...it could have been truly awesome!

Below, a fun piece of art by Don Rosa showing the use of the Guardian that most of us geeks would come up with for it. Scanned from an issue of "Enterprise Incidents." 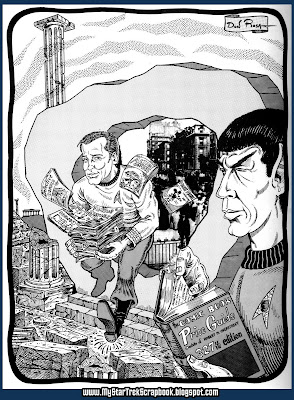 Below, another of my photo humor pieces. 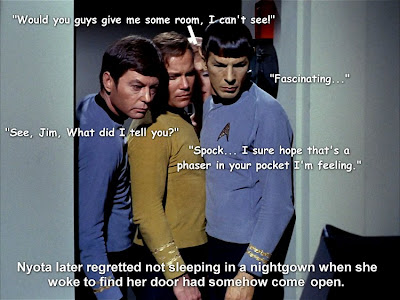 Word spread rapidly for a ship as large as the Enterprise.

Wow, great scanned article, and you're right... the plot of Black Hole would have been a much better film than that of TMP for TMP (if you follow what I mean). I'd never thought of that before. The Enterprise vs. a black hole would have been awesome enough (in the literal sense of the term) for the scope the producers/writers were hoping for, without necessitating a retread of an episode we'd already seen. And having a human villain would certainly have humanized the plot, while still leaving room for the epic Kahn in the next flick. The two bad guys would have been different enough to be engaging in their own rights... instead of what we've seen, where (almost) every villain since Kahn is just watered-down-Kahn, some guy seeking revenge on the Enterprise or one of its crew for reasons we don't care about (unlike Kahn, since we'd already met him and understood his need for revenge). The Borg excepted. And lordy, I'm off my point. Once again: nice post!

Or... you know... "Khan." Yikes! Spelled the guy's name wrong throughout my entire post. If only there were some sort of machine right at my fingertips where I could "google" or "wiki" or something to make sure I got that right...

Glad you liked the idea! It would have brought the best of both movies together to surpass either one I think. Kind of like peanut butter and chocolate! "Hey, you got your Star Trek in my Black Hole! No, you got your Black Hole in my Star Trek!"

Somehow it sounds a little strange putting it that way, though...

But yeah, also having Ilia be Reinhardt's old student would have added a little in-crew tension also, playing the part of the Anthony Perkins' character's role.

Wow! Fantastic post. Thank you so much for scanning. A fantastic read :)

Yes, I have a long list of Star Trek comics and coloring books to retrieve as soon as I can find my way to the Guardian of Forever. Fortunately, I don't have to worry about magazines because I'm finding them all here.

Hey, keep in mind, Frederick, that STTMP has had a lot more work done on it that you probably have on yourself, so if its holding up better than you are, its had a lot of help! ;)

That last one had me flashing on the way Archie, Michael and Gloria all try to get through the door at once. So, here's a laugh for you :D

Thanks for posting this Fantastic Films article, Frederick. I used to have that issue "back in the day" and it brought back great memories.

I think TMP is the red-headed stepchild of the film series. Instead of a blatant Star Wars rip-off like everyone else was doing, Roddenberry looked primarily to 2001: A Space Odyssey for inspiration (and of course TOS's The Changeling...). It's the only TOS film that tried for an epic feel. They succeeded in some areas, but also failed in others (characterization, over reliance on SPFX) but at least they tried.

Loved your idea to blend TMP and TBH! Someone's gotta do a mash-up now on YouTube.

Man, I just saw the issue of Fantastic Film at a comic book convention here in Boston this past weekend. I looked through it and i was going to get for the Black Hole painting images but I found some other stuff that that i had to get over that.
~UU~
useduniverse.blogspot.com