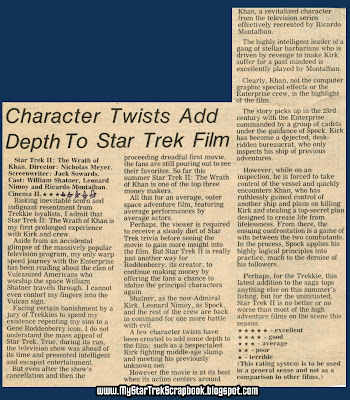 Above, a local Beckley, WV newspaper review for "The Wrath of Khan" that was published in early June, 1982. Giving the second movie only three stars ("average") the cynical reviewer admits he doesn't understand the appeal of Trek. So I suppose the lukewarm review he gives the film is still a backhanded compliment considering the disdain he obviously held for the fans and the franchise. (When I clipped the article I added the extra stars to show my own regard for the movie.) Perhaps the critic's name was left off the article to avoid imagined reprisal from the fans, or simply because it was penned by someone on staff too unimportant to warrent a byline.

Below, a photo clipped from the entertainment section of a Charleston WV paper. 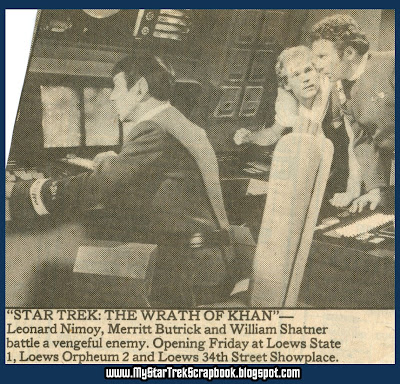 Next, a clipping from TV Guide the week that the movie premiered on pay TV in March of 1983. 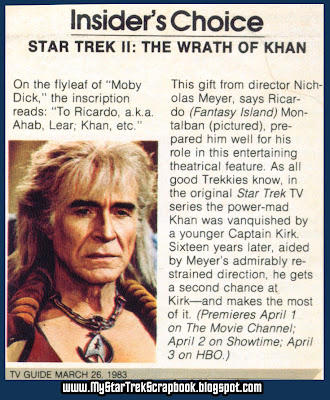 Below, the cover of a July 1982 Jet magazine. I wasn't able to clip tha actual article, all I could get was the cover. I think someone else gave it to me who knew of my interest, but they didn't bring the whole magazine. I suppose they thought I only liked to look at pictures. 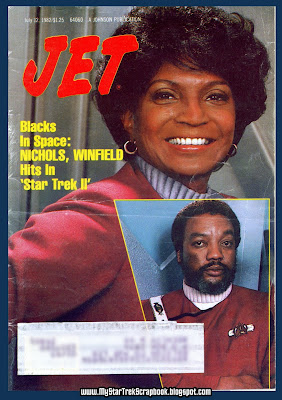