For the past two entries I've posted pages from the Starlog issue #3 coverage of the Bicentennial 10 convention, held in September of 1976 in New York. I continue the series of articles now with pages that spotlight appearances by George Takei, Deforest Kelley, Bill Shatner and Susan Oliver (Vina), as well as a look at the animated series by a consultant to Filmation studios.
(Click on images to enlarge.) 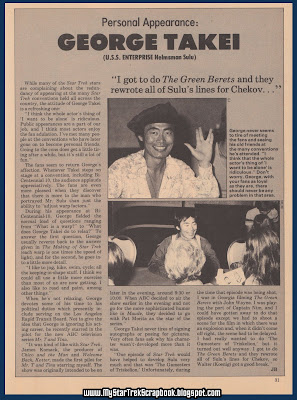 Need to brush up on your warp factors, George... not quite accurate there, as any fan would tell you. 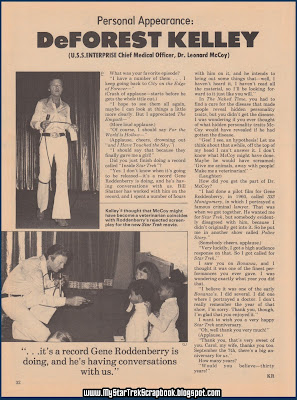 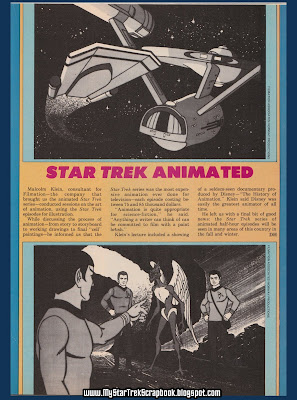 A cel showing the infamous six-fingered Spock. This kind of mistake would never have slipped by in the live-action series; although to be fair they did leave off one of Scotty's fingers from time to time. 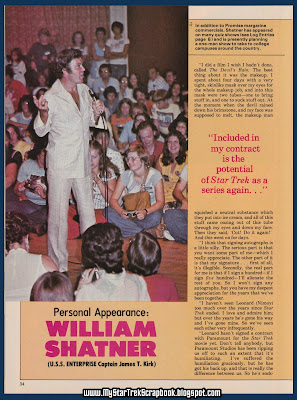 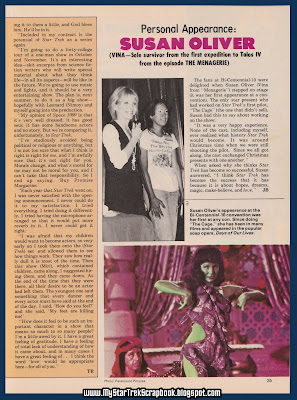 I'll be finishing up the rest of the articles next time, so come back soon... or if you are visiting after the fact, click on the next entry to read!

Bonus: Below, a small 1973 newspaper clipping about the cartoon from my scrapbook, from the series first run. You can see the tape I used, before I was old enough to know better than to use scotch tape for such things. But, I was just 13, so I can be excused... can't I?

It's funny to read these old interviews. I was just at Fan Expo 2010 in Toronto and despite what he thought in the 1970s, William Shatner does do autographs now. Maybe it's because he charges for them. Don't know. But he told the absolute truth: his signature is completely illegible! I just checked. Thanks very much for posting this!

I am amazed to find myself here. I'm the girl standing onstage next to Susan Oliver in the tribble shirt. They pulled me out of the audience when I went up front to snap a photo of Susan. Of course, the photo was published in black and white and you can't tell I was completely green (thanks to a large application of food dye) which took mucho scrubbing in the shower to remove!

Wow, that's so awesome! Glad to hear from you, what a memory to have. Did you have the original Starlog that this was published in?