The collection cabinet (one of three) opens today to bring forth from the hallowed archives of sacred writing Issue #3 of the venerable Starlog, bearing the cover date of January of 1977, meaning it came out in November of the previous year. As isolated as I was from connecting with fellow fans, the extensive coverage of the September '76 Bicentennial 10 convention in New York was like manna for my famished Trek appetite. I plan on posting all of the pages covering the convention over the course of a week or two, so come back soon for more awesome flashbacks to the fun 1970's!
(Click on images to enlarge.) 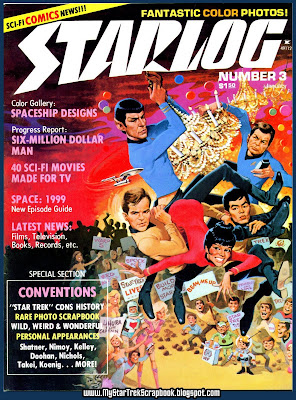 Love how Nichelle's booty gets the center focus of the cluster! 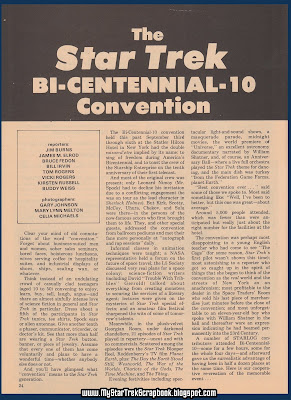 Below, the first of the stars spotlighted, the lovely and charming Nichelle Nichols, followed by Grace Lee Whitney. 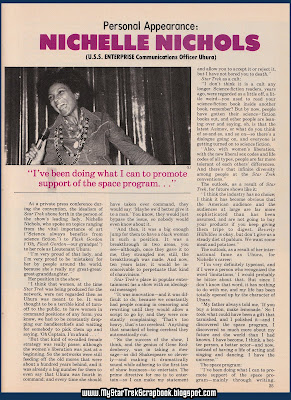 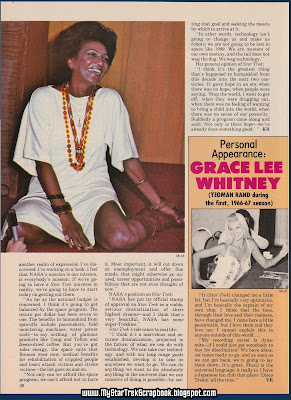 Remember, check back in soon for more in this series of articles!

Below, from the same issue, the inside cover ad for Gene's album "Inside Star Trek." I have great memories of that record, which I still own. I recorded some of the interviews with the stars onto tape and replaced Gene's voice with my own, as if I was conducting the interviews. It sounded pretty good, and was an early expression of my talent for audio production, foreshadowing my work in radio in later years. 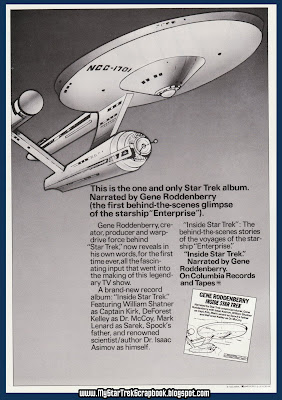 Bonus: Below, a dollar bill that lives up to the name; dollar Bill... Shatner, that is. A greenback made for especially tucking into the thongs of strippers, mostly of the also green-backed Orion variety.