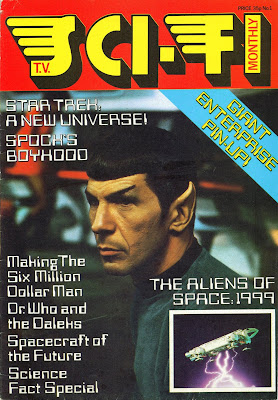 What a great, little-seen photo for the cover!

In 1976 I lived in Ft. Lauderdale, and was 17. I had just bought my first car, a 1968 Mercury Cougar, and it has been my favorite car out of all I had; a first-love kind of thing. I finally had some freedom to go places I wanted (that were further than what I could walk), so every payday I would head over to my favorite place; a comic and SF collectables store called Starship Enterprises. I will add a post (with photos) on this wonderful place very soon; but suffice it to say for now that during that period I added many great items to my collection of books, magazines, etc.

One of the items I picked up each month was a British magazine called TV Sci-Fi Monthly, a newspaper-style publication with all color pictures printed on glossy paper. Sort of like a higher-class "Monster Times," which I loved also. I managed to get about 5 issues of the magazine, and in future posts I'll share more articles and images from it. I know you'll enjoy it; the magazine was excellent in both writing and original artwork! Below is the first in the series of articles on Trek from this awesome publication. 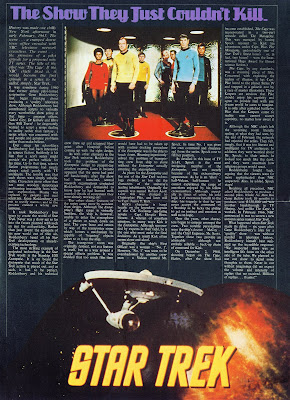 The second article inside was on Spock's boyhood, which I'll scan and post soon. Below is an image on the back cover that was worth the entire price; that photo of Vina as the Green Orion Slave Girl is one of the best publicity shots of her I've ever seen. Wowza!!! 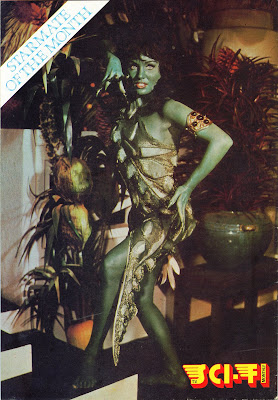 Vina puts her best foot forward and into my heart.

Above is another installment of the Funky Winkerbean comic strip, from December 7, 1979. The week of the premiere of ST:TMP was an exciting one for the fans.
Posted by Frederick

I have 6 Sci-Fi Monthly magazine's I am interested in selling. All 6 are in pristine condition sealed in plastic collectible sleeves. I have no.'s 3, 4, 5, 6 and two copies of #8. Please contact me at loveandsource@gmail.com if you are interested in them. Thank you, Glenn

I am really curious to hear you take on the new one......