A Labor Of Love 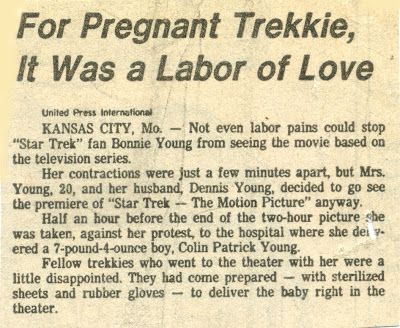 In retrospect, this mother (wherever she is) probably now realises this was a bit silly. But for fans at the time, ST:TMP was like the Second Coming and they weren't going to miss it.

If they'd stayed and she had the baby, everyone would have laughed and clapped at the end when Spock they had witnessed the birth of a new life form!

The excitement was at a fever pitch when the movie was coming out. In the next few posts I'll be adding some strips of a newspaper comic called "Funky" which reflected the anticipation.

Clipped from the Atlanta Constitution on December 6, 1979, the day before the movie opened.
Posted by Frederick

Actually, Frederick, the AJC was cheaping out on the name--the full name of the comic was "Funky Winkerbean", after its high-school-aged lead character... and the cartoonist was a definite Trek fan, like Bloom County's Berke Breathed, but a rarity back in the day. I had to keep a five-day strip where the computer (blinky tape-drive console) that "runs" Funky's HS puts on a Trek convention at the school.

Great job exposing your archives! I plan to do something similar from my own stuff at my soon-to-launch site.

Thanks for the reminder! I had forgotten that the name of the strip was that.
I look forward to seeing your site, please let me know when it launches!