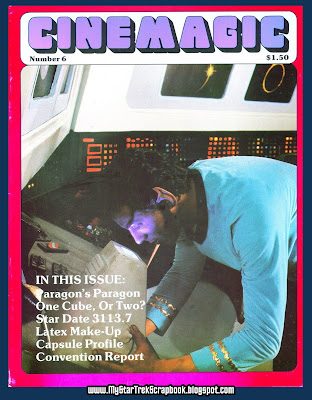 Although fan-made Star Trek films have come into more of the public view lately, primarily because of the media exposure of "Star Trek: The New Voyages" by James Cawley and crew, they are not a new thing. Enterprising fans have been making their own Trek on Super 8 and videotape since the 70's. With the advent of digital video and PC editing available to the personal user, making Trek movies is more within the reach of the fan with time and a little money. They didn't have such technical tools back then... but that didn't stop them! They had imagination and the burning desire to make Star Trek themselves. 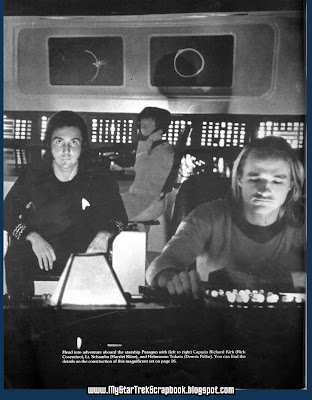 One of the earliest high-profile fan films (at least among other fans) was "Paragon's Paragon," by John Cosentino. The awareness was boosted by the article in the then-new magazine "Cinemagic" (issue 6, published in spring of 1976) and it has since become something of an urban legend; spoken of in hushed tones but seldom actually seen. It will be interesting to see if it turns up online anywhere soon as a result of the present inquiries about it.

The lack of computers to do effects (like the amateur film-makers of today have access to) meant they had to do the best they could with little-to-no budget. The hard work and long hours spent making sets and costumes, and filming under such limited conditions, are a testament to the love and devotion that the show has inspired among it's fans.

The story was a direct adaptation of the James Blish novel "Spock Must Die" which came out about 6 or 7 years earlier; although the article doesn't mention that. Here's the article in it's entirety... enjoy! 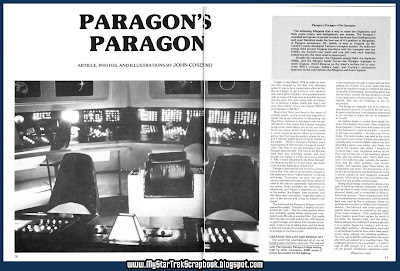 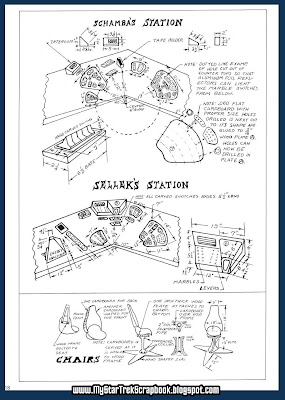 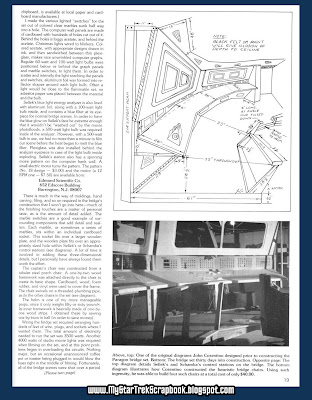 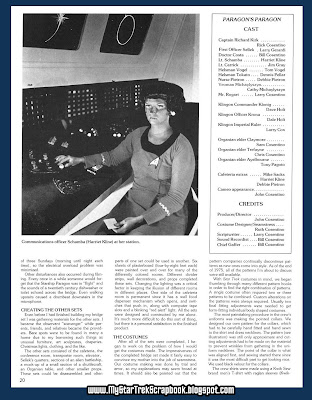 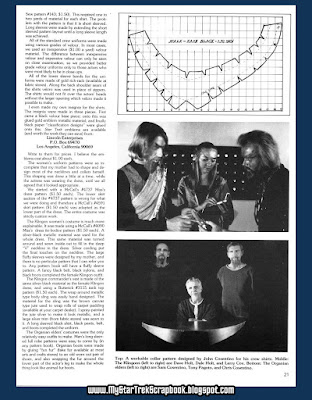 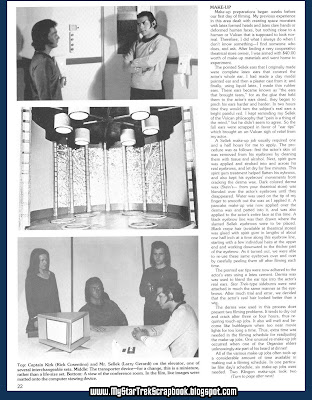 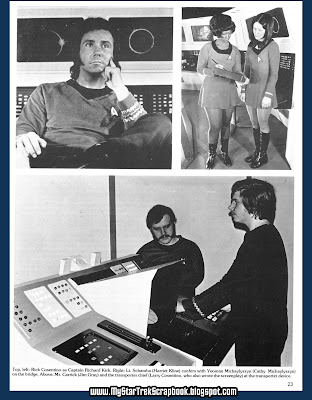 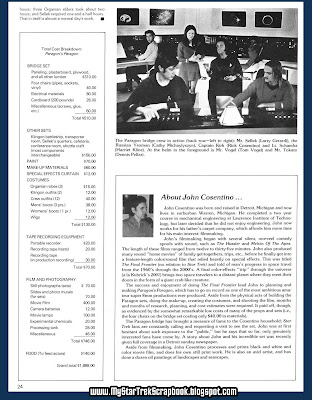 John, if you are still out there and get wind of this, please comment and catch us up on what you are doing, and if there is a way we could see what the film turned out like! We want to see it!

UPDATE: The film turns up!
Although the film is not available to view, I do have color screen captures from the video version to share with you! Go to this post to view them!

UPDATE #2 from 11-2010: John Cosentino contacts me! Yes, it's true, the film-maker himself found the posts I had made on the film, and emailed me. He plans on having the Super8 film digitized and then he will make available clips from it for us to see. Check back in soon for more developments!

Update for 4-24-12: John Cosentino, due to the input from fans wanting to know more, has begun a blog about the movie! Go here to read more, and get all the inside info! http://www.paragonsparagon.com/
Posted by Frederick

Just found you from TrekMovie.com's "best of" list (congrats, BTW). I was surprised to see this post. I remember the article in the Detroit News sunday section that had color versions of some of these photos... might even still have it in a box somewhere; I kept it for years.

I never knew this production got any other publicity, and was wondering just the other day what had ever become of it... What a freakout (not unlike that helmsman's hair)!

I wrote a book about the history and future of fan films called Homemade Hollywood that just came out, and I spent a lot of time trying to track down the folks from that Cinemagic "Paragon's Paragon" article. No dice. I couldn't find the Detroit News story either, which was a disappointment, but their online and library-accessible archives just weren't very good. If anyone has any further info on this movie--or others from the period--I'd love to hear about them for my daily fan film blog, fancinematoday.com!

I'll keep my internet eyes and ears open, and perhaps we'll lure someone in with the knowledge we seek! I'll let you know if I get any bites.

Frederick, I just discovered your site from TrekMovie.com, too. I love it. I have been collecting every scrap about Star Trek as well. Along with your scans, I enjoy your accompanying text. I will be visiting regularly! I wonder how long it will take me to get through your archives.

Looks ambitious! I would love to see the final product! Love the website, too - thanks TrekMovie.com! :)

I knew editor-publisher Don Dohler of CINEMAGIC very well back in the '70s, worked for/with him, and at one time had every issue of his original indie CINEMAGIC magazine (before Starlog bought him out). Alas, my old collection is long gone. So it's a special treat to see this article again, and I'm grateful.

There were a few other high-quality Super 8 STAR TREK fanfilms in those days, and I saw some of them, but can't recall any names or details. Too many years have passed...

Re: Paragon's Paragon, another person worth locating who might know the maker of the film is special effects artist John Dods, who was also part of the Dohler gang with John Cosentino back in the '70s. Dods is listed on the IMDb.

Personally, I've made about 100 amateur/indie sci-fi films since 1970, only a few of which were "fanfilms"...but none Star Trek. However, the influence and inspiration of The Great Bird is to this day felt and appreciated in much of what I create.

Hey, I realize this is an old post, but I remembered this article and did a search to see if the film was available online. I was a subscriber to Cinemagic from the first issue when I was ten (and had a letter in issue 11 or 12), and have always wanted to see this fanfilm. I really appreciate your posting the article here. I really wish John Cosentino would put that movie online. I'd happily chip in a buck or two to watch it.

Hi there, was very excited to find this post! Over the past year, I've been trying to rebuild my old Cinemagic library that I had as a kid. Yesterday I finally found a copy of Film Magic and was thrilled to find the article again about "Paragon's Paragon". I remember that was a HUGE inspiration for me, especially seeing how much work went into Cosentino's adaptation.

Has there been any further movement on this being transferred into a format that we could either see online or purchase? All those years ago, reading over the log entries about everyone's films, I was so anxious to see all those films, but regrettably we didn't have the means to see all those amazing projects. I'd love to finally see the end result of some of the projects that found their way into the pages of Cinemagic.

Thanks again for the postings and updates!

No news yet, I need to email the gentlemen and see if he has been able to proceed with transferringthe footage. I will report back with the results!

I remember this issue. Seeing the cover it all flooded back. The feeling of being a fan at a time when information was scant and hard to get, the admiration for those with the dedication to produce something like this film, even being willing to overlook the non-Starfleet hair styles.

I think this was also the issue where they had step-ty-step instructions for making a transporter effect using glitter and some christmas lights. How far we've come.