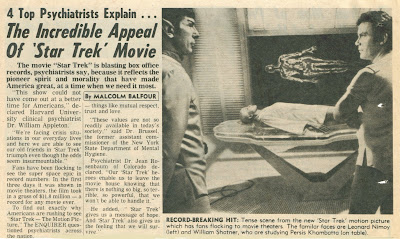 Clipped from "The Enquirer" in the middle of December, 1979. The Star Trek movie honeymoon was in full swing and the lovers don't start focusing on the other's faults until the honeymoon is over. 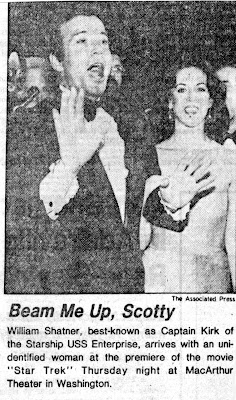 And the woman is Shatner's then-wife, Marcie Lafferty. She even had a small role in the movie as Illia's replacement as navigator. You can see below a clipping from a tabloid, probably "The Star," of their wedding on October 20, 1973. 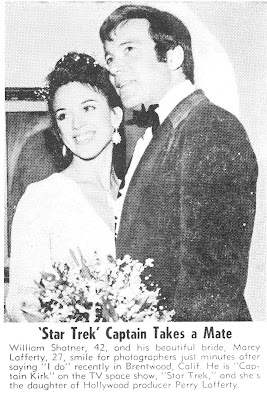 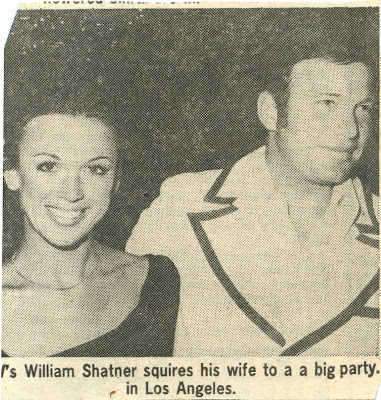 Oh man ... what got into men and their fashion choices in the '70s? The huge ties, the wide lapels, the bellbottoms, the leisure suits, the white belts and matching shoes - The Herb Tarlek-ization of America. Good stuff!

Hey, those fashions were actually considered cool at the time! I wish I'd kept my pistachio green polyester leisure suit...it'd be worth a fortune on eBay! (And I'd have to sell it since there's no way in he!! I could fit into it today.)

I have compiled a couple of CDs of all my favorite disco oldies from the time and I listen to them still, pretty often actually. good memories!

EXCELLENT! Love tabloid stuff on the Shat' from the relative dark ages of the '70s.