Our archives open up this time to feature pages of issue #51 of the "The Official Star Trek Fan Club" magazine, published in August of 1986. At this time the magazine was in a smaller digest size, handy for rolling up and shoving into your jacket pocket to read during recess. Nah, just kiddin,' I'm sure everyone saved their copies in perfect condition like I did mine.

In this interview with everyone's favorite yeoman, conducted by superfan Dan Madsen, (read the Memory Alpha entry on him here and a Trekcore.com interview here) we find out a little more about this leggy actress. 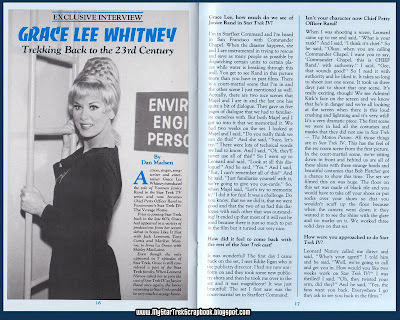 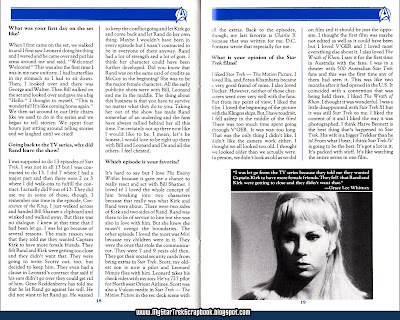 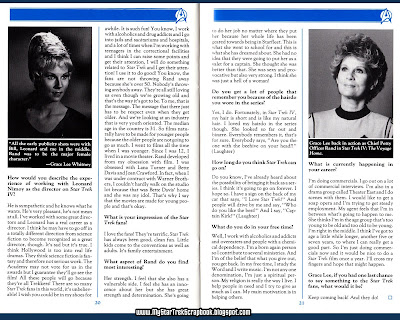 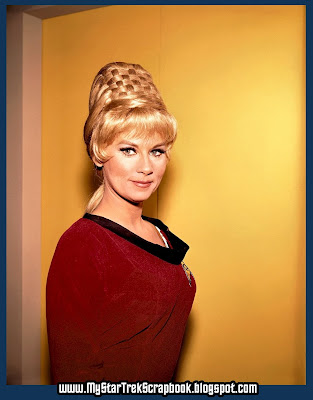 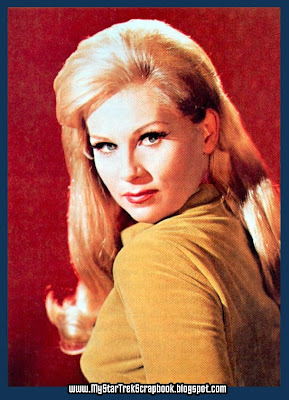 "Why, captain... you so seldom come to my quarters after hours." 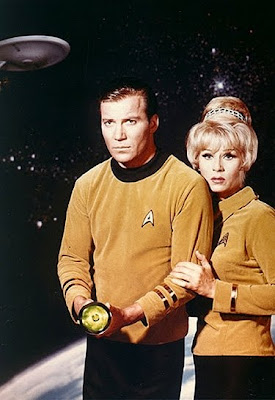 Sadly, the green flashlight did not work out as a sellable toy tie-in.*
Bonus:below is another of the Leaf 1967 cards, this time featuring our damsel in distress. 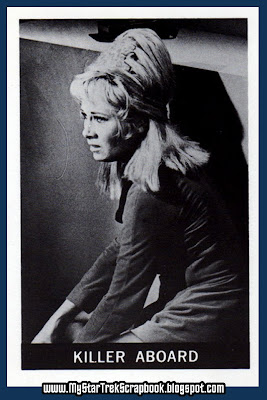 Below, my autographed photo of Grace in a memorable pose! 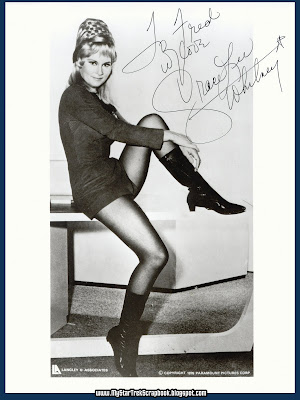 "Did I mention I like having my legs looked at?"
Some earliers posts with Janice Rand photos can be found by using the Grace Lee Whitney tag on the sidebar.
Bonus: below is another of the four TOS coasters in the set, this time featuring the Romulans. 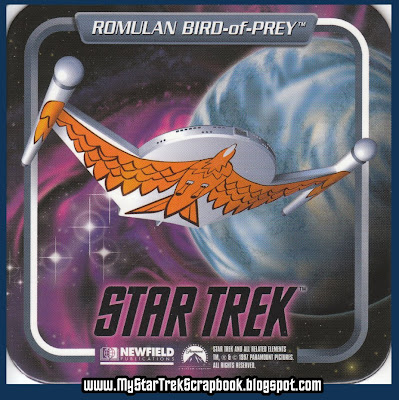 Bonus #2: continuing the Romulan theme, below is another of the Skybox Masterpiece Series, depicting the famous first encounter with the Romulan Bird Of Prey. 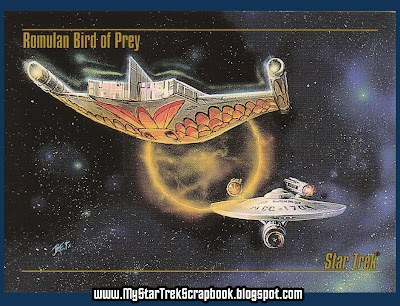 The card back, below, is in error concerning the number of appearances in the original series; the Romulans also appeared in it in "The Deadly Years." Later, it was further depicted as one of the ships that captured the Enterprise in remastered episode "The Enterprise Incident."

*The jokey caption in no way confirms that the flashlights were or were not some kind of spec phaser by a toy manufacturer as some are speculating (see the Trek BBS post here). I just like to add funny captions and this one coincidentally seemed to back up the argument. I have no idea if they were or were not, but if I were to weigh in on it, I would say that the flashlights, as well as the other equipment that they held in this pre-series photo session, were just odd props gathered for it, and not specially prepared in any way.
Posted by Frederick

I love Grace Lee Whitney/Janice Rand. The interview suggests she and Majel Barrett thought their parts in STIV were going to be bigger than they turned out to be. That's too bad. Thanks for the post. Your blog is the best!

Thanks for commenting, glad you are enjoying the blog!

It is too bad that their parts were reduced to mere-seconds cameos; I'm sure that they were disappointed by that. But that's Hollywood for ya. I wish their deleted scenes could have been included as bonus materials on the DVD.

The Romulan Bird of Prey, still one of the best decos ever on a starship anywhere. The old AMT model used to give me a heck of a time trying to line up all the decals to make the bird design.

That was one model I never had, but considering the trouble the decals on the Enterprise gave me, I probably would have never done the BOP.

Do you still have it? For some reason none of mine survived.

I always liked that early publicity uniform Grace Lee wore - the gold shirt and black pants. It was very classy looking. I actually prefer it to the mini dress they eventually used on the series, which is just totally impractical for military service....

It's true, the uniforms in "The Cage" were more practical, and attractive also. But as true as that is, I shudder to think how much I would miss that skirt on Uhura, particularly. Sexist, I know, and unrealistic.. but those skirts looked so good!

I guess I'm bad. Pants are better. But I like the skirts!!! Arrrgh!

I absolutely love the character of Janice Rand, and truly believe that the potential for some good story lines between her and Kirk were floundered. If they wanted Kirk to move on with other women, that's fine-maybe Rand could have met and fallen in love with another man, maybe several. What an interesting dynamic that would've been.
They also needed Rand to do more than just serve coffee all the time. Harlan Ellison did a wonderful job portraying Rand in his original teleplay of The City on the Edge of Forever. She was brave and resourceful! Kirk still falls for Edith Keeler on the script, which just goes to show that Kirk could have been with other woman with Rand still on the show.
I don't get it.
Amazing blog, and thank you for having it!

Thanks for commenting, and I agree that Rand was a wasted opportunity. I feel as strongly about Uhura being passed over for so much as you do Rand, I think! Whitney deserved better than being dumped as she was. Glad you are enjoying the blog!