From issue #7 (click to view the cover) of the lower-rung publication "Quaismodo's Monster Magazine," printed in April of 1976, comes Part One of a two-part look at the cultural phenomenon of Mr. Spock. When I say "lower rung" I mean that the magazine was of inferior quality compared to some of the others put out at the time; in comparison to "Famous Monsters," "Monsters of the Movies" or "Castle of Frankenstein," it suffers the most. The cheap pulp paper used, which reproduced the black and white photos poorly, tore easily and turned yellow rapidly. The layout seemed shoddy and the writing, generally geared to the younger crowd, varied in quality from one article to another. However, being the lover of monster movies as I was, and Star Trek to a greater degree, I still bought some of the issues, especially when they featured a Trek article. This in-depth look at our favorite Vulcan was competently done, and worth posting here for your enjoyment, whether for the first time or again after many years. 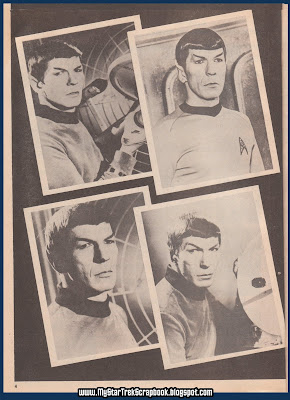 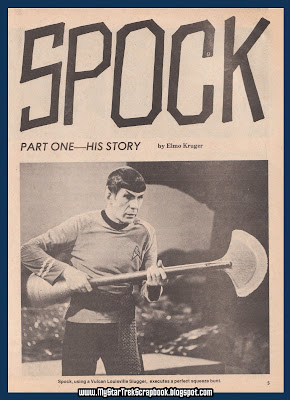 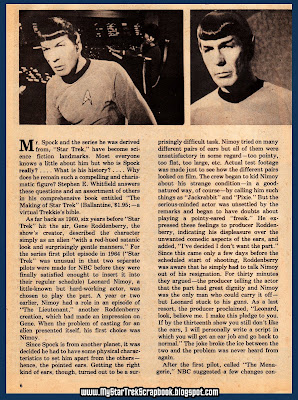 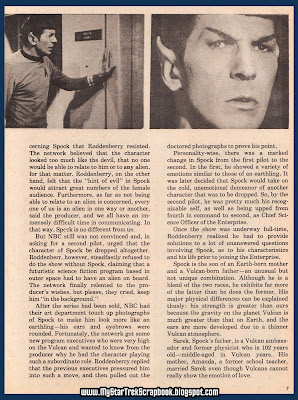 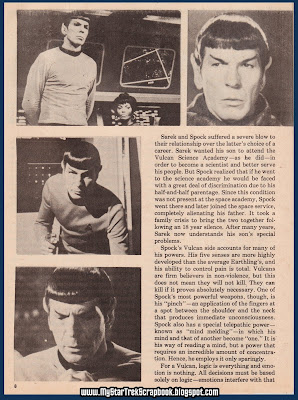 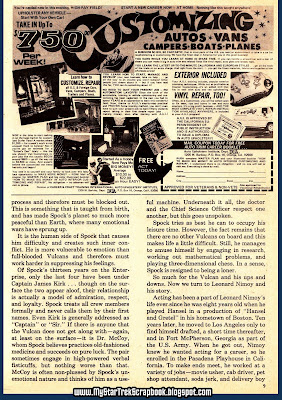 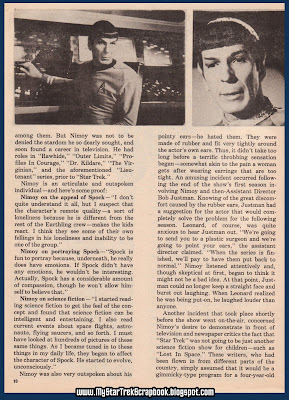 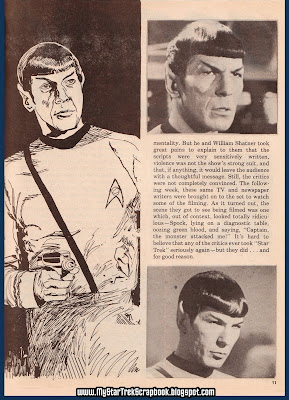 The magazine also included a Trek "spoof" in comic form, which I won't include here for the simple fact that it was the most lowbrow, idiotic and poorly-drawn parody (so-called) one could imagine, best left unseen and forgotten. Alright... if you don't believe me, look at this one panel and you'll see what I mean (I don't want to sully this blog by even posting it as a clickable smaller image). Sheesh... "lower-rung" indeed. That one scraped the bottom of the barrel.

Part two of the article on the Vulcan is coming next time, however, featuring a rare discussion about the appeal of Spock with one of fandom's well-known writers, Jacqueline Lichtenberg, who co-penned a book many of us remember fondly; "Star Trek Lives!"

Bonus: Another cover from the nostalgia-generating James Blish adaptation covers, this time volume #7. Thanks to blog reader Donald A. for contributing it, since he read in an earlier post that my copy had no cover, being bought at a used bookstore years ago. 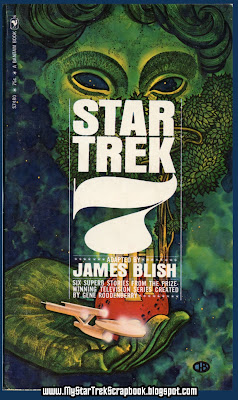 It was right then that Sulu swore off of the weed he had been secretly growing in his hobby garden. 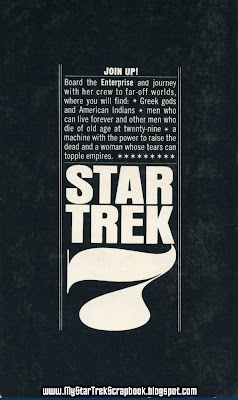 The artwork on this book is one of the more unusual covers, depicting as it does a version of the scene from "Who Mourns For Adonais," albeit in a rather stylized fashion. This is the first time any scene from an episode was referenced on a cover, and marks the start of less "retro" covers and a move toward more modern artwork.

I have never seen that book cover before. It's beautiful in its own way, but also slightly creepy. It has a "Zardoz" quality...whatever that means.

You're right, the mask-like or statue-like visage in the background does remind one of the floating head in that film! Good call.

It's also strangely evocative of The Green Man from Pagan mythology, which is odd since I can’t recall any parallels to it in any classic Trek episode. I think the wonderful comment about Sulu “swearing off the weed he had secretly been growing” might be as equally attributable to the artist of this book over. It is fascinating, though, because classic Trek in its day really did inspire so many things in people’s minds. It was really magical back then.