1994 article: The Death Of Captain Kirk

Before the internet became what it has in recent years, one of the main sources of info about upcoming movies for us Trekkers was the tabloids. Although couched in gossipy terms, one could get facts early that weren't available anywhere else, if one didn't mind wading through the other junk. Kind of like eating lunch in the middle of a cow pasture; you might enjoy the meal but feel a bit dirty from the surroundings (come to think of it, it's not much different from the internet in that respect). From the "Star" tabloid, published Sept. 6, 1994, comes this article on "Star Trek: Generations," as the secret of Captain Kirk's death is spilled... and without the warning that there were "spoilers" in the article, as the term came to be known. Thanks, Star!
(Click on images to enlarge.) 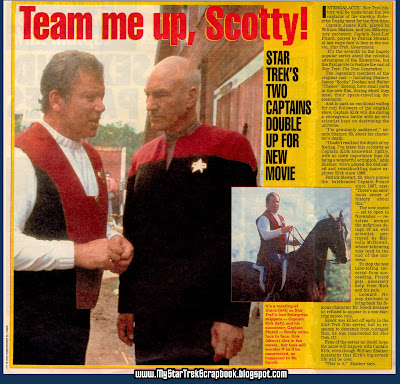 It's funny reading some of the errors in the article, such as the bit about them teaming up to fight a scientist "bent on destroying the universe." That seems a bit overly ambitious, not to mention impractical. If you destroy the universe, who would be left to gloat over it to?

Below is a later article, printed September 20th, 1994, reporting the fandom's furor over the spoiled secret, thanks mostly to the paper for publishing it. Unlike the last-minute script change in "The Wrath Of Khan" which responded to fan reaction by providing an "out," there never was one added to this movie to allow for a chance at Kirk's resurrection. The NG movie producers weren't interested in bringing him back, they only wanted him gone so they could move on with their versions, which is understandable. But Shatner would have reason to regret it when he was locked out of the new '09 movie by the fact. At least Kirk lives again in the enjoyable novels from Shatner "co-written" by Judith and Garfield Reeves-Stevens. 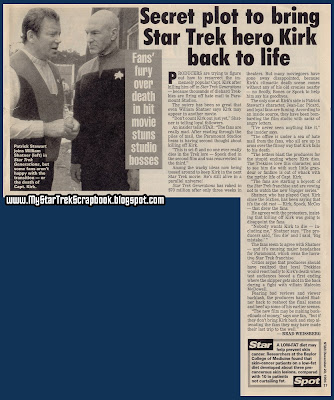 Bonus: Below is a scan of one of the items members of the "Official Star Trek Fan Club" received when joining; I got this sometime in the mid-80's as far as I can recall. 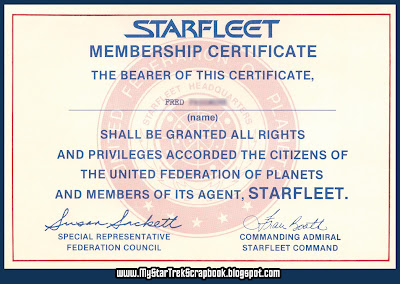 Bonus: Below is one of the multitude of small newspaper clippings in my scrapbook regarding the many conventions that were held in south Florida during the mid-70's. This one from 1976 is significant because although I didn't get to go to it (three guesses why), a friend brought me back autographed pictures of Nichelle and Doohan, which I still treasure and have framed on my wall.

And finally, below is a short interview with Gene about the planned movie from "The Monster Times," issue #42, published in July of 1975. This took the place of the regular feature "Trek Talk" in that issue, so I'm tagging it with that anyway for easy location. It's always interesting to look back at these movie announcements and remember how long it took to see it made, and how many false starts there were. But if nothing else, it kept Star Trek alive in the public's mind, and for that reason, Gene's efforts were worth it. 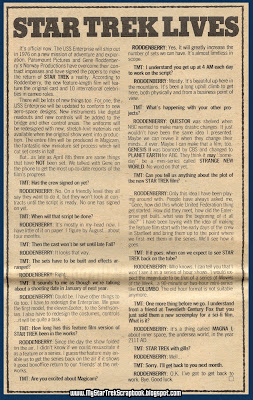 It's interesting to read in the above interview that Gene was considering making the new movie a prequel, which is what the recent '09 movie was (in a way). But one has to wonder how they would have handled the fact that the stars were ten years older by that time. Would they have hired younger actors and actresses to portray the characters in the flashbacks? Also, the idea of shoehorning in the "cameos by ten international celebrities" would hang on almost up until the making of "ST:TMP," but thankfully it was forgotten. Can you imagine how cheesy it would appear now? Between that and "Magicam" it's a good thing the movie didn't get made at that time.