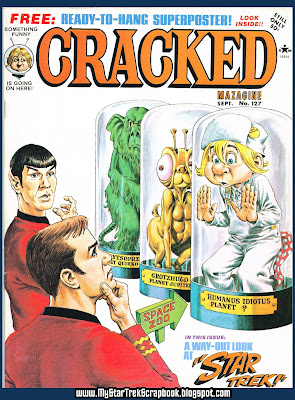 Issue 127 of "Cracked," published in September of 1975. This "Mad" imitator was on a somewhat lower rung, but I still quickly bought it whenever it featured a spoof of shows or movies I was interested in. This issue I picked up when I was 16 (going on 14) and lived in Macon, Ga. I used to get all of the spoof mags (Mad, Cracked, Crazy and even the trashy Sick) when they featured anything I was interested in, like Trek, Planet of the Apes, Kung Fu, and genre movies.
Although extremely silly, even as spoofs go, the artwork by Severin was good, with spot-on caricatures. One "plot" element is a Kirk sex-change which was the theme of a story in the "New Voyages" paperback collection of fan-written efforts the next year. But, what was with the red shirts on the cover? 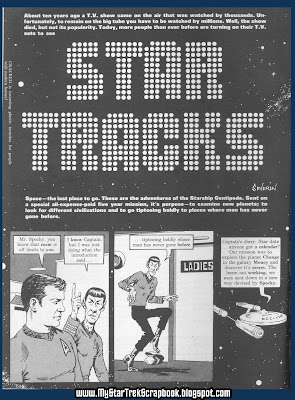 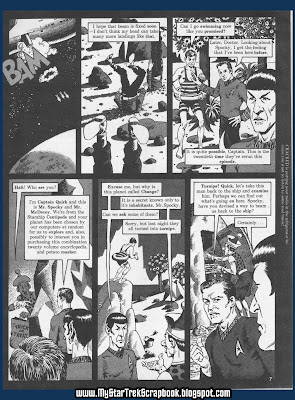 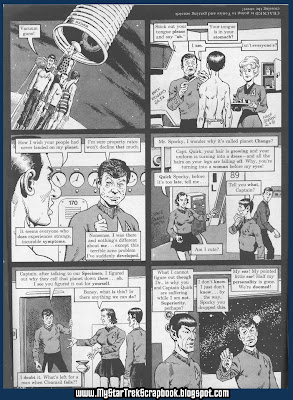 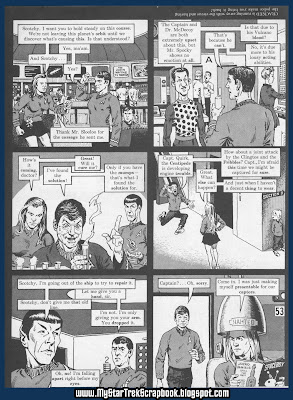 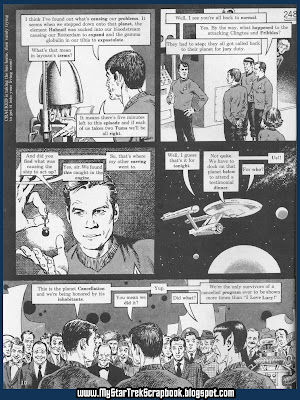 I think it would have been funnier if all of a sudden the guys on the ship started chasing the female Kirk, like he did the women. Missed opportunity there to insert a little commentary. Today, "Cracked" only exists as a website, but it's a darn funny one and worth bookmarking. They even still have the occasional Trek article, like this one.

Since today's post centers around the silly, here's a cool candid shot of Nimoy as he "cracked" up with Kelley and Shatner during the filming of "The Apple." Perhaps they just got a load of David Soul's silver wig and eyeliner makeup! 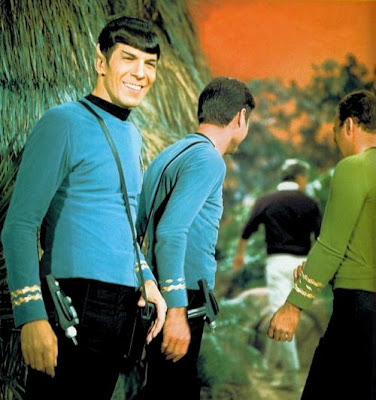 The crew never knew that the whole time Spock was laughing at them behind their backs.
Posted by Frederick

I was the same way, Mad and Cracked if it had something that I found of interest I would get it.

That candid shot is pretty cool.

All in all, I guess De Kelley made out best in the Cracked spoof. While Shatner turned into a sexy woman (poetic justice after all the babe-ing he did on the show) and Nimoy developed space leprosy, all Kelley got was a case of acne. I sense a payoff by De's agent! One of the real treats was seeing Severin's versions of Soupy Sales, Robert Culp, Bill Cosby, Jonathan Winters, Red Skelton, Jackie Gleason, Phil Silvers, Robot B-9, et. al. in the last panel. Thanks for posting this!

You are right, and hardly anyone did caricatures so good as Severin. There's never any doubt who he's drawing! Some cartoon spoof artists were overdone and sloppy, but his was always drawn with clean lines and easy to follow panels.

Glad you enjoyed it! More to come in the future.

Sorry to butt in..but isn't Severin a she? I always assumed the art to be by Marie Severin, a Marvel Comics staffer, and a heckuva good cartoonist.

I could all too easily be wrong, however.....

Butt in all you want! :) It could be her; but I always assumed it was her brother Jon Severin.
http://en.wikipedia.org/wiki/John_Severin

The style looks more like his and he did a lot for Cracked.

Yeah...I thought of him after I'd posted. That's why you'll never see me on a game show: my mind blanks out even when doing crossword puzzles!

I should've known the Severin thing, having myself worked in the field for a few years...even got to do some Star Trek covers in the late 80's! :)