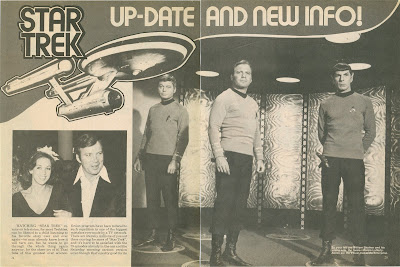 In the summer of 1974 I was 15 and still living in Macon, GA and whenever my mom took my grandma to the doctor I would get to go to the used bookstore downtown on Cherry Street. They had a shelf of used magazines, and that is where I found this followup article to the last post, from the TV/Movie Pinup magazine. (If you look closely you can see in some places where I foolishly wrote in some commentary.) After we left the doctor, we went by Fincher's Barbeque on Houston Avenue for lunch (an old-fashioned drive-in with curbside service) and I'd read the magazines I'd found while chowing down in the back seat on one of their delicious pulled-pork BBQ sandwiches. Good memories! 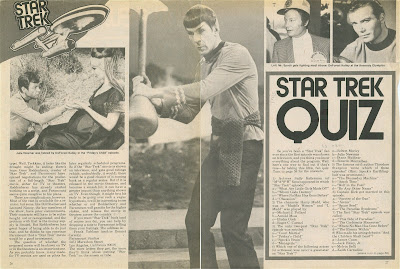 Of course, when we got back to my Grandma's house, the pages were clipped out of the magazine, which was then tossed out, and the article taped in my scrapbook, which then went into my safe-keeping place, the closet in the spare bedroom where I stayed when visiting her. It did not pay to leave such treasures at my home where they might be discovered and threatened with burning. In case you have read in this blog before about my struggles with my stepdad over my "childish" hobbies, as they seemed to him, here is a photo of him as he looked at that time. Just so you can get a mental image of what I had to deal with back then to be a trekker.

As a bonus, below is a scan from the old scrapbook, this time another of those fantastic publicity photos. My senses used to tingle when finding one of these! 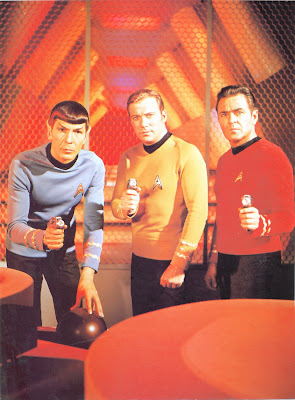 Also of interest:
On my newspaper movie ad blog, "Held Over!" I have posted an article and photo featuring Jeffery Hunter, aka Captain Christopher Pike, from way back in 1954 as he starred in a movie called "The Young Texans."
Posted by Frederick